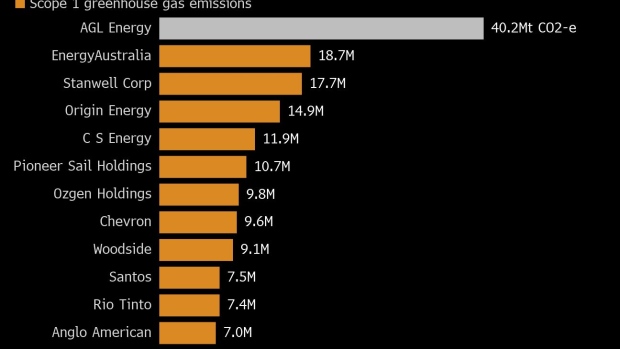 Mike Cannon-Brookes, co-chief executive officer of Atlassian Corporation Plc., during an interview at the company's R&D center in Bengaluru, India, on Thursday, Sept. 8, 2022. The company intends to hire more than 1,500 people in India by end of fiscal 2024. Atlassian unveiled a new R&D center in India Thursday. , Bloomberg

(Bloomberg) -- Billionaire Mike Cannon-Brookes had four nominees appointed to the board of utility AGL Energy Ltd., boosting his ability to pressure one of Australia’s top polluters into a faster shift away from fossil fuels.

Investors endorsed all candidates proposed by the Atlassian Corp. co-founder’s Grok Ventures, three of whom were opposed by the company’s existing directors. Holders also backed plans to exit coal power by 2035 -- a decade earlier than previously proposed -- prompted by the climate activist’s pressure.

The appointments add further drama to a months-long struggle over strategy at Australia’s largest emitter of Scope 1 greenhouse gases after a takeover attempt by Cannon-Brookes and Brookfield Asset Management Inc. was rebuffed, plans for a demerger were abandoned and key managers exited, including the chief executive officer and chairman.

“This represents another majority vote by AGL shareholders pointing to their desire for change, fresh thinking and more execution capacity to realize the potential of this great company,” Grok, which holds about 11% of the company, said in an emailed statement.

Votes cast in advance of an annual meeting Tuesday were sufficient to ensure all four nominees would be elected, AGL’s chair Patricia McKenzie told investors. Cannon-Brookes has backed five of the firm’s now expanded nine-person board, having also supported the earlier appointment of Miles George.

“The board of an Australian-listed company has been transformed by shareholders over its handling of climate risks,” Brynn O’Brien, executive director of advocacy group the Australasian Centre for Corporate Responsibility, said in a statement. “This is both a victory for shareholders and a scathing indictment on those who spent years destroying shareholder value by delaying the inevitable in the face of an escalating energy transition.”

Cannon-Brookes, one of Australia’s richest people, became the 185-year-old utility’s largest shareholder in May and has argued that setting an earlier date to shutter coal plants would encourage additional investments in clean-energy projects and also help bolster profitability.

AGL has acted on feedback from investors and “can make a material difference in reducing the nation’s carbon footprint,” McKenzie told the meeting. While the utility is Australia’s largest carbon emitter, the company is also a top private investor in renewable energy and operates one of the biggest portfolios of renewable and battery assets, she said.

Smart money is following “an absolute wall of opportunity” in the energy sector and companies that curb emissions faster are likely to unlock more value, Brookfield vice chair Mark Carney said in a Bloomberg Television interview last week. The fund is leading an A$18.4 billion ($12.3 billion) offer to acquire AGL’s rival utility Origin Energy Ltd. and ramp up investments in renewables.