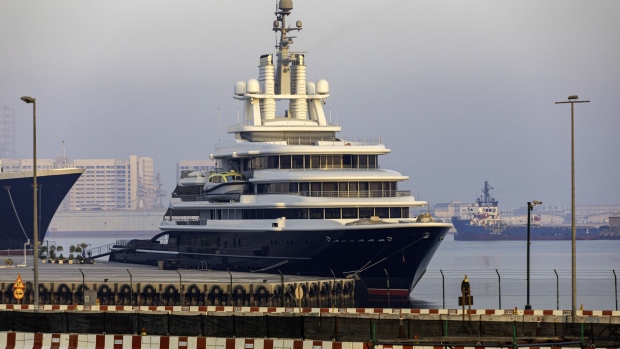 Billionaire Farkhad Akhmedov agreed to pay his ex-wife around 135 million pounds (US$186 million), ending the largest financial dispute that Britain’s divorce courts have ever seen.

Tatiana Akhmedova accepted a cash and art settlement that is around one-third of a 2016 court award, a spokesman for Akhmedov said in a statement. The agreement brings to a close the bitter and long-running legal fight and means that the oligarch will retain his 115-meter (380-foot), nine-deck luxury superyacht Luna.

A spokesman for Akhmedova didn’t respond to a call and email requesting comment.

Billionaire’s Yacht Holed Up in Fight Over London Divorce Award

The fight for assets has spanned at least nine jurisdictions since a London judge awarded Tatiana some 450 million pounds -- amounting to 41 per cent of Farkhad’s assets -- in 2016 and raises questions about the ability of English courts to enforce judgments. Tatiana has been funded by litigation finance group Burford Capital Ltd., which said it will receive US$103 million.

Azerbaijan-born Farkhad made much of his money from the sale of his stake in a Russian gas producer in November 2012 for US$1.4 billion. But the billionaire refused to make any divorce payments, calling the 2016 divorce order illegitimate, and moved to Russia.

“I will burn this moneys rather then will give her,” Farkhad said in a WhatsApp message to his son in March that year.

The couple met in 1989, marrying four years later and moving to London, where Tatiana has lived with their two children ever since. The marriage formally ended in late 2014.

The case attracted huge attention over the pursuit of the Luna yacht -- the single largest asset owned by Farkhad -- which has been holed up in a Dubai port since 2018. With the settlement, the vessel, one of only a handful of the world’s luxury “explorer yachts” with steel hulls designed for breaking through ice floes, will be free to sail again.

The agreement comes after previous negotiation attempts collapsed. The two had sought to end the dispute earlier in the year after Tatiana won a case against her son Temur who was said to have helped his father hide assets.

After that ruling, the judge called the family one of the unhappiest ever to have appeared in her courtroom.

Tatiana and Burford “spent years and millions of pounds on a costly global tour of various jurisdictions in their attempts to seize Luna,” a spokesman for Farkhad said in a statement. “Every one of them failed and the yacht remains and will remain in the ownership of Farkhad and the family trusts.”