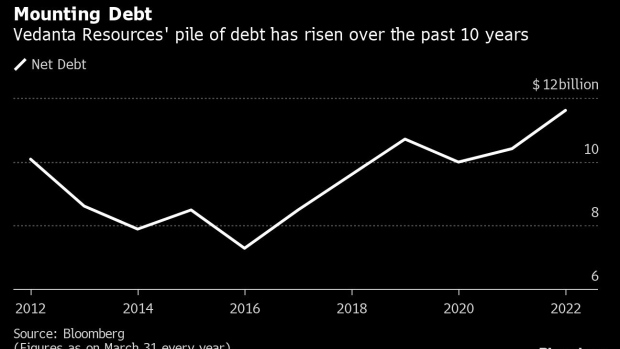 Emissions rise from a chimney at a digestion unit at the Vedanta Ltd. Alumina Refinery at night in Lanjigarh district, Odisha, India, on Tuesday, June 18, 2019. , Bloomberg

(Bloomberg) -- Billionaire Anil Agarwal’s Vedanta Resources Ltd. will seek shareholder approval next week for a plan that could shore up cash flow and help boost bonds due next year, even as credit markets signal longer-term concern about its debt.

Shareholders of Indian unit Vedanta Ltd. will vote Oct. 11 on a company plan to move money out of its reserves and into its balance sheet, increasing the probability that the funds will be used for dividends.

Dividends from the unit have become a major source of funds recently for the London-based parent to repay its debt. If Vedanta Resources does get a dividend, that would allow it to float a tender offer for at least part of $900 million of notes due in 2023, which are trading at about 94 cents on the dollar. That contrasts with the prices on its dollar securities that mature in 2024, which are indicated around 61 cents. Levels below 70 cents are typically considered distressed.

It’s a moment of reckoning for Agarwal, 68, who got his start as a scrap metals trader and built a commodities empire over two decades that is India’s biggest producer of aluminum and zinc. One of Agarwal’s closely-held firms is also working with Hon Hai Precision Industry Co., the assembler of most of the world’s iPhones, to build a chipmaking facility in the state of Gujarat.

But the group’s rapid expansion including acquisitions of metal companies has left it with an $11.7 billion debt load as of March, and Moody’s Investors Service noted its “consistently weak liquidity” in an August report. Getting the dividend payout may help allay investor concerns about its finances in the near term.

“There is a high chance of the shareholders approving the move of cash from general reserves to retained earnings as there is the possibility of dividend payments,” said A.K. Prabhakar, head of research at IDBI Capital Market Services Ltd. “Transparency has always been an issue with Vedanta but new investors like the company for its aggressiveness and dividend paying capability.”

Haitong International Asset Management Ltd. holds some Vedanta Resources bonds. It sees a small possibility that the company may either call back notes this year or float a partial or full buyback offer for bonds due next year in case Vedanta Ltd. announces another big dividend, said fund manager Sunny Jiang.

Vedanta Resources is in a “very comfortable position” to meet all its debt obligations, the company said by email, and declined to comment on the possibility of the firm buying back bonds due next year.

Investor nervousness about Vedanta Resources is not new and its bond yields climbed to double-digits in 2020. However, a recovery in profits driven by booming demand after the pandemic and multi-year-high metal prices eased concerns over its ability to meet debt obligations.

How did the company get so big?

Vedanta Resources was the first Indian business to list in London back in 2003, before Agarwal took it private 15 years later when his Volcan Investments Ltd. bought out minority investors as part of efforts to streamline the group’s structure.

Mumbai-listed unit Vedanta Ltd. was built on a series of ambitious acquisitions by Agarwal: In 2001, he bought control of then government-owned Bharat Aluminium Co. in one of the first tests of India’s efforts to offload state holdings. Agarwal followed that up with the purchase of another state-run firm, Hindustan Zinc Ltd. He successfully bid for iron ore producer Sesa Goa Ltd. in 2007 and for Cairn India, despite having no oil and gas experience. Vedanta Resources also owns copper and zinc operations in Africa.

Vedanta Resources has in the past tried to take the Indian unit private to have greater control on the cash flows but the plan was obstructed by minority shareholders.

Vedanta Resources holds about 70% in the Indian unit. Dividends to Vedanta Resources from Vedanta Ltd. totaled about $1.5 billion in the financial year ended March, with an additional $932 million in April, according to Bloomberg Intelligence. In July, Vedanta Ltd. announced another dividend of close to a billion dollars. There are concerns though that the risk of an economic recession may put more pressure on commodity prices, and affect its ability to pass on larger dividends.

The unit had 125.9 billion rupees ($1.5 billion) of general reserves as of March 31, 2021, according to the latest company data available. It also had cash and equivalents of about 343.4 billion rupees as of June 30, company filings show.

What are stakeholders saying?

The company’s liquidity and complicated corporate structure are major concerns for strategist and bondholders. Most have ruled out a possibility that Vedanta Resources will exercise call options this quarter on two of its 2024 dollar-denominated notes amounting to $2 billion as the securities are trading way below par.

The spiraling cost of issuing new debt and the company’s stretched finances are the major reasons cited for why it might not retire its debt at the first opportunity.

“The probability of Vedanta calling the notes is very low,” said Trung Nguyen, senior credit analyst at Lucror Analytics Pte.  “Access to capital is difficult at the moment. Thus, Vedanta would struggle to find cash to call the notes.”

(Updates with a chart to show the company’s bond move after 14th paragraph.)