Onex and airlines: How WestJet's new owner has invested in the sector

Nearly 20 years after abandoning his hostile bid for Air Canada, Gerry Schwartz finally got his airline by agreeing to buy WestJet Airlines Ltd. (WJA.TO) for $3.5 billion.

Schwartz’s private equity firm Onex Corp. (ONEX.TO) agreed to pay cash for Canada’s second-biggest carrier, and plans to take the company private in one of the buyout firm’s biggest deals. Onex offered $31 a share, a 67 per cent premium to the airline’s closing price May 10. The acquisition is valued at $5 billion including debt, Toronto-based Onex said in a statement Monday.

“This doesn’t represent any big strategic pivot or transformational change for the company -- we really invested in an existing team, an existing culture and an existing plan," Tawfiq Popatia, a managing director at Onex, said in an interview.

It’s the first major leveraged buyout of an airline since 1989 when Northwest Airlines was purchased by an investor group that took it private. Apollo Global Management acquired Sun Country Airlines Inc. two years ago in a smaller leveraged buyout.

For Onex, the friendly deal gives the private equity firm the airline it has long sought, after making several investments in the aerospace sector, including Spirit AeroSystems Holdings Inc. The firm tried to acquire Air Canada and merge it with Canadian Airlines in 1999. The $2.4 billion hostile bid, with financial backing from AMR Corp.’s American Airlines, was eventually abandoned after an unfavorable court ruling. Onex was also part of a group that failed to buy Australia’s Qantas Airways Ltd. in 2007.

“Onex is a very aviation-focused fund so they know the space,” said George Ferguson, a Bloomberg Intelligence analyst. “WestJet is looking for growth, which will be hard to find inside Canada as the market is relatively small.”

The surprise move comes as competition heats up in the Canadian airline sector, with several discount carriers entering the space. The sale also follows an announcement last month that tour operator Transat A.T. Inc. is seeking a potential sale. Transat rose 4.5 per cent Monday, while Air Canada, the country’s biggest carrier, rose 5.5 per cent. Calgary-based WestJet soared 60 per cent to $29.62 at 3:55 p.m. in Toronto. Onex jumped 3.8 per cent.

Onex has no intention of using WestJet as a consolidator in the Canadian airline industry, Popatia said, adding that the private equity firm is not one of the potential suitors for Transat.

“This company is really the best at what it does. There are not a lot of brands like this in consumer-facing industries - not just in Canada - anywhere," he said. "That brand is a source of competitive advantage."

WestJet’s stock has lagged behind Air Canada in recent years, as the bigger carrier has been one of the top stocks in Canada. Before Monday’s rally, WestJet had dropped 23 per cent since 2014, compared with a 336 per cent gain for Montreal-based Air Canada.

WestJet suspended all financial guidance for the year due to the grounding of the Boeing Co. 737 Max. Chief Executive Officer Edward Sims has said there are no planned changes to any Boeing orders or deliveries. WestJet expects the 737 Max to be back in service in the second half of this year, Sims said in an interview with BNN Bloomberg TV.

Sims said he saw the Onex acquisition as an investment in WestJet’s current strategy. "What I like is the ability to actually think long-term," he said in an interview, noting that working as a private company will allow WestJet to focus on implementing its strategic initiatives without having to report on their progress every quarter. 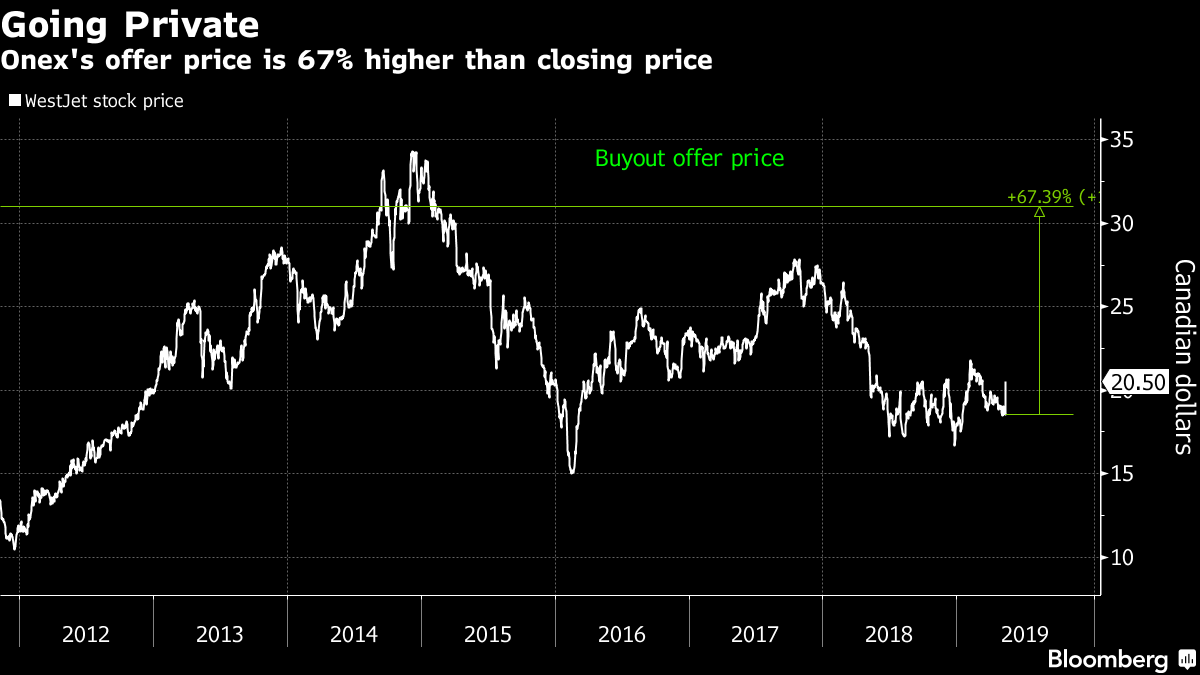 "What I really like from a sell perspective - from the WestJet perspective - is working with a like-minded partner who sees the value that we have always seen in the strategic direction we are taking," Sims said.

WestJet’s earnings have come under pressure in recent years with the launch of several lower cost airlines in the country. WestJet has tried to capture some of that market itself with the launch of its own ultra-low cost carrier, Swoop. At the same time, it has expanded its offerings primarily to Europe with a fleet of Boeing 787s.

WestJet’s strategy is to improve the yields on the 25 million airfares it sells each year through improved segmentation, ranging from the millennial market with Swoop or the corporate traveler with business class in the 787s, and by driving more traffic through its hubs in Calgary, Vancouver and Toronto, he said.

“They have dabbled in low-cost transatlantic flights but largely to the top of Europe,” Ferguson said. “Onex could be looking at the airline as a platform to develop low-cost long-haul which has strong interest from many parties.”

Onex is a believer in both Swoop and the overseas expansion, Popatia said.

Founded in 1996 by a group of Western Canadian businessmen, including Clive Beddoe, the airline was originally modeled after Southwest Airlines as a low-cost carrier with a single fleet of 737 aircraft. A fun-loving corporate culture was a big part of that model. Airline attendants, ticketing staff and pilots would banter and joke with customers, a carefully cultivated branding designed to contrast with Air Canada. That relationship with employees has been tested in recent years as the airline’s pilots and flight attendants unionized.

The union representing 4,000 of the cabin crews at WestJet and regional carrier Encore said it "expressed guarded optimism" about the deal. The union said it was concerned about what the deal means for the future of the employee share-purchase program that most are relying on for retirement savings.

"The good news is that Onex is looking to maintain WestJet as a Calgary-based airline,” said CUPE 4070 President Chris Rauenbusch, in a statement. “They’ve committed to no job losses and to WestJet’s expansion plans. We will hold them to that promise."

WestJet has purchase obligations of about $4 billion for 44 737 Max aircraft and 7 787 firm orders, Becker noted. The company said May 7 it was on track to reach its margin expansion target of $120 million this year. It’s also working toward an annualized savings target of $200 million by the end of 2020.

"WestJet is in the middle of a significant transformation as they move to be a full-service airline with products from bare bones fares to high-end first class offerings on 787s,” Helane Becker, a Cowen & Co. analyst, said in a note Monday. "We expect shareholder approval” given the premium over Friday’s closing share price.