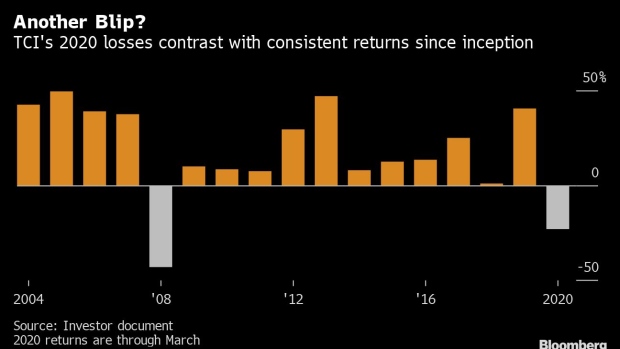 The Children’s Investment Fund lost about 19% during the month, the worst since it started in 2004, according to people with knowledge of the matter. The decline pushed the fund’s first-quarter loss to about 23%, the people said, asking not to be identified because the information is private.

A spokesman for the London-based investment firm, which managed about $30 billion before March losses, declined to comment.

Hohn’s hedge fund specializes in taking large stakes in companies and agitating for changes to boost their share prices. It runs a long-biased portfolio spread over a small number of stocks, making it susceptible to sharp drops in values.

Hohn launched TCI in 2004 after earning a reputation as a gifted stockpicker in the London office of Perry Capital, a New York-based hedge fund. His bets have included companies such as ABN Amro Bank NV, News Corp. and most recently some attempted agitation against the London Stock Exchange Group Plc.

The tactic has worked well for the firm, with TCI making money every year since 2008. It gained 41% in 2019, its best annual performance in six years.