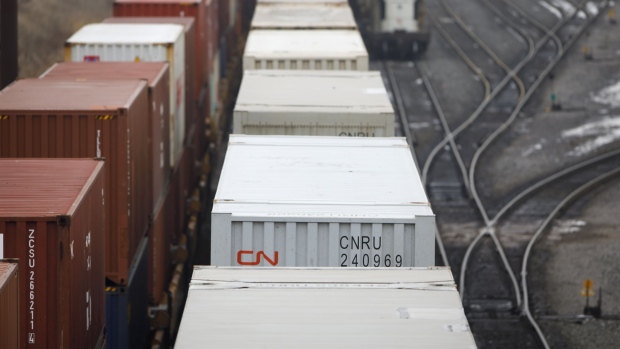 Canadian National Railway Co. containers sit on tracks at the Intermodal Terminals in Brampton, Ontario, Canada, on Tuesday, Nov. 19, 2019. About 3,200 workers at CN Rail went on strike at midnight Tuesday, threatening to crimp shipments of oil, potash and grain across the country. , Bloomberg

The investment firm founded by billionaire Christopher Hohn is pushing Canada’s two large railways to disclose their greenhouse gas emissions and give shareholders a say in plans to reduce them.

London-based TCI Fund Management Ltd. has submitted shareholder proposals to Canadian National Railway Co. and Canadian Pacific Railway Ltd., asking them to present climate action plans at their annual meetings in 2021. TCI wants investors to have an advisory vote on those plans every year.

The firm is the largest shareholder of Calgary-based Canadian Pacific with an 8.3 per cent stake as of Sept. 30, according to data compiled by Bloomberg. It’s also one of the 10 largest holders of Montreal-based Canadian National with 2.9 per cent.

TCI has put climate change at the center of its ESG investing policy, which warns that the fund may vote against directors of companies that won’t reveal their emissions or lack “credible” plans for cutting them.

“TCI remains committed to driving the reduction of carbon emissions at the corporate level, and establishing a climate action plan that can be voted on by shareholders is a key step forward in accomplishing that goal,” Hohn said in a statement.