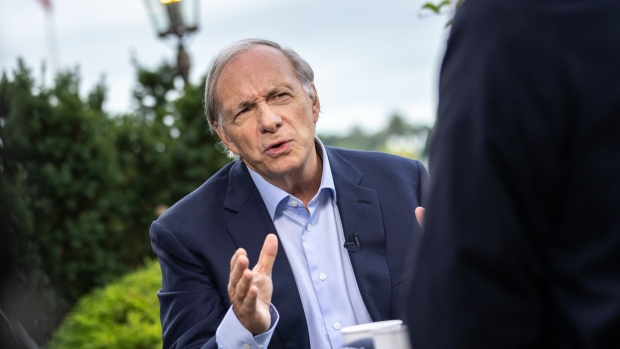 Ray Dalio, founder of Bridgewater Associates LP, speaks during a Bloomberg Television interview at the Greenwich Economic Forum (GEF) in Greenwich, Connecticut, U.S., on Tuesday, Sept. 21, 2021. The GEF brings together leaders in global finance, business, media and government for global investment forums to discuss the economic implications of the defining issues of our times. , Bloomberg

(Bloomberg) -- Ray Dalio sounded the alarm bell on Thursday after inflation in the U.S. surged to the highest level since 1990 and warned his followers that rising portfolio values don’t actually signify increasing wealth.

“Some people make the mistake of thinking that they are getting richer because they are seeing their assets go up in price without seeing how their buying power is being eroded,” Dalio wrote in a post on LinkedIn. “The ones most hurt are those who have their money in cash.”

Dalio, the billionaire founder of Bridgewater Associates, has long been known for his view that there are better assets to hold than cash amid central bank money printing. In periods of rising prices, he says it’s actually more important to look at what you can buy with that money.

“When a lot of money and credit are created, they go down in value, so having more money won’t necessarily give one more wealth or buying power,” Dalio wrote, adding that real wealth becomes a function of production capacity over time. “Printing money and giving it away won’t make us wealthier if the money isn’t directed to raise productivity.”

Dalio had a firm warning for the U.S. and said it would be important to keep the implications from policy developments in mind.

“There isn’t an individual, organization, country, or empire that hasn’t failed when it lost its buying power,” he wrote. “The United States now is spending a lot more money than it’s earning and paying for it by printing money that is being devalued. To improve we have to raise productivity and cooperation. Right now we are on the wrong path.”

Read More: Worst Is Yet to Come for U.S. Inflation as Fed, Biden Feel Heat