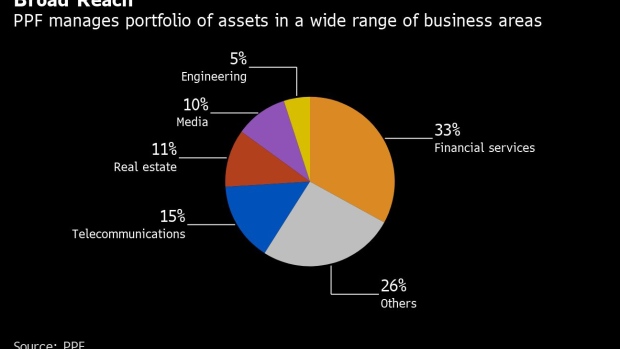 (Bloomberg) -- The Czech billionaire Kellner family is shifting investment focus back to Europe as it plans to exit its consumer-lending operations in China and trim its presence in other Asian markets.

The Kellner’s investment company PPF Group NV is revamping strategy following last year’s death of its founder Petr Kellner. The family, which has a net worth of $12.3 billion according to the Bloomberg Billionaire Index, has picked the founder’s long-time investment partner Jiri Smejc to run the business that operates in 25 countries and in industries including financial services, telecommunications, media, biotech and real estate.

Following the coronavirus pandemic and regulatory changes, PPF is looking for a strategic partner that would buy a majority stake and eventually acquire full ownership of the Chinese operations of its consumer lending arm Home Credit, Smejc told reporters on Tuesday. He expects more clarity within about six months on whether such a plan is feasible.

PPF is also overhauling Home Credit’s activities in other previously fast-growing markets in southeast Asia and India because of difficulties in obtaining banking licenses, which prevent access to deposits and are putting the company at a competitive disadvantage.

That’s why PPF is looking for partners that can provide cheap funding and is ready to negotiate sales of majority stakes in Home Credit’s operations in those countries, with the buyers providing funding for further development of the business.

“We’re negotiating in all of those markets. The talks are in various stages,” Smejc said, without elaborating further.

PPF wants its core activities to be closer to its home region and the Chief Executive Officer said that at some point he’d like to make a bigger investment -- worth at least 1 billion euros ($1.1 billion) -- in western Europe, if the company finds the right opportunity.

“We have several industries where we have the strategic know-how, and that’s where we’ll be looking,” Smejc said. PPF will consider other sectors if it finds an attractive deal, he added.

One potential area of expansion is financial services and Smejc mentioned retail banking in Germany as a potential example. Any such investment would most likely be via a joint-venture rather than an outright acquisition, according to the CEO.

PPF’s media business is showing good results and “it’s certainly one of the areas where we’ll be looking” for potential acquisitions, Smejc said. “We think there will be interesting opportunities there, including in western Europe.”

The current downturn in global asset prices is creating investment opportunities, but it’s not yet attractive enough because the decline still probably hasn’t reached the bottom, he said.

Smejc said he can imagine cooperation with other investors for larger transactions in Europe, saying that private-equity firms have a “similar mentality” and could be natural partners.