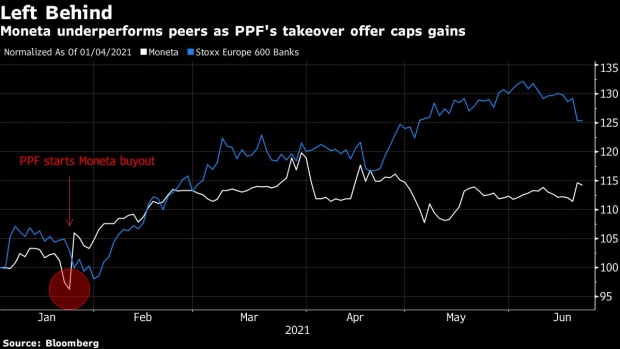 (Bloomberg) -- The heirs of billionaire Petr Kellner, who died in a helicopter crash this spring, are about to find out whether they can complete his dream of expanding the $48 billion business empire into traditional banking.

Moneta Money Bank AS shareholders will vote on Tuesday on a complex deal designed to give control to the Kellner family’s PPF Group NV and create one of the biggest Czech retail banks. While the proposal has a better chance than the first approach that failed two years ago, the investment company is facing an uphill battle to finish one of the last projects of its founder.

Moneta’s second-biggest owner and two proxy advisers to other investors have recommended rejecting the plan, arguing the price set in January didn’t reflect the recent rally in bank stocks. PPF, which owns 30% of Moneta, has pushed back, saying its vision is to build a strong lender with Czech roots that will better compete in a market dominated by international players including KBC Groep NV and Societe Generale SA.

“We understand that not everyone will necessarily like this,” said PPF’s Chief Financial Officer Katerina Jiraskova in a letter printed by Hospodarske Noviny newspaper on Monday. “We strongly believe that all shareholders will benefit from the project to create a Czech banking champion.”

Click here for more details of the proposed deal

Under the proposal, Moneta will buy PPF’s Air Bank Group for 25.9 billion koruna ($1.2 billion), paying mostly with new shares that will give the private-equity group majority and dilute other holders. To some investors and analysts, Air Bank’s price at 2.5-times book value seems inflated, compared with multiples of 1.5 for Moneta and 1.3 for its local competitor Komercni Banka AS.

The offer values Moneta at 80 koruna per share, which was 19% above the market price when announced five months ago at the peak of the coronavirus lockdown. That premium has since turned into a cap on the stock price as industry peers have rallied and analysts raised the average 12-month price projection for the Czech bank as a standalone company to 95.6 koruna.

Other shareholders could still benefit from the deal if its business objectives are met, but the pricing is less attractive now and “the odds really are 50/50” in the vote, according to Milan Lavicka, an analyst at J&T Banka AS in Prague. Even if the proposal fails, PPF would probably still try to resurrect the tie-up either by improving the terms or holding a fresh buyout, he said.

PPF, which had about 40 billion euros ($48 billion) in assets at the end of 2020 and whose acquisitions rarely unfold in public, has made several attempts to persuade investors with appeals from top managers. Moneta’s leadership has also held multiple calls with analysts and investors in the past few weeks to promote the deal.

In one of them last month, Chief Executive Officer Tomas Spurny described the valuation of Air Bank as “rich” but worth paying to create a more competitive and profitable company. The CEO said he understood from communication with PPF that it considers investment in the bank, which pays generous dividends, as protection against inflation.

“They see Moneta as a potential asset to increase value for the family that inherits the stake in PPF Group,” Spurny said. “It is this simple.”