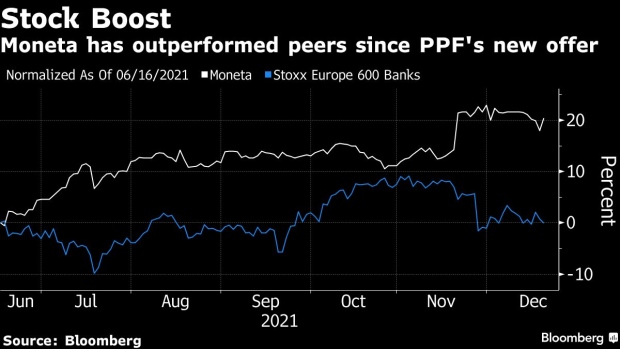 (Bloomberg) -- Petr Kellner’s heirs cleared the last hurdle for merging their Czech bank with a bigger local lender, completing one of the billionaire’s long-coveted deals nine months after he died in a helicopter crash.

Shareholders in Prague-traded Moneta Money Bank AS on Monday approved a complex proposal to buy Air Bank Group from the Kellner family’s PPF Group NV for 25.9 billion koruna ($1.2 billion). It was the investment firm’s third and final attempt to merge the two banks, after it was forced to offer better terms following a failed approach in June.

Both PPF and Moneta’s management have promoted the transaction as a way to create a bigger and more profitable local bank that could better compete in a market dominated by the units of KBC Groep NV, Erste Group Bank AG and Societe Generale SA.

Subject to regulatory approvals, the deal will create the fifth-biggest Czech bank with about 510 billion koruna in assets. The new entity would have almost 2.5 million customers, the third-biggest client base in the nation of 10.7 million, and would become the country’s biggest provider of consumer loans.

“I believe that in the medium term, the results, numbers and successes will prove that this was the right path for further development of Moneta,” Tomas Spurny, the lender’s chief executive officer, said after the shareholder meeting.

To increase chances of sealing deal, PPF built a nearly 30% stake in Moneta earlier this year. The transaction will be mostly financed through issue of new Moneta shares, and the outcome of the capital increase will determine whether PPF gains control over the combined entity.

Unlike most PPF deals, this case has unfolded in public and included clashes with activist shareholder Petrus Advisers Ltd., which says it owns about 10% of Moneta. The London-based fund was a vocal critic of the plan, saying the terms were unfair and that the Czech bank would be better off as a standalone company.

To ease concerns of other shareholders, PPF agreed to let all owners buy the new shares next year, while keeping Air Bank’s earlier price tag. Some analysts expect PPF will eventually gain control and make a buyout offer, although this depends on the number of other shareholders participating in the capital increase and other factors.

Moneta shares have outperformed since the improved proposal because it sets a de-facto floor of 90 koruna per share for a potential mandatory buyout offer if PPF does gain control. Still, the current market price of 93 koruna trails the 102.55 koruna average 12-month price target, for standalone Moneta, among analysts covering the stock.