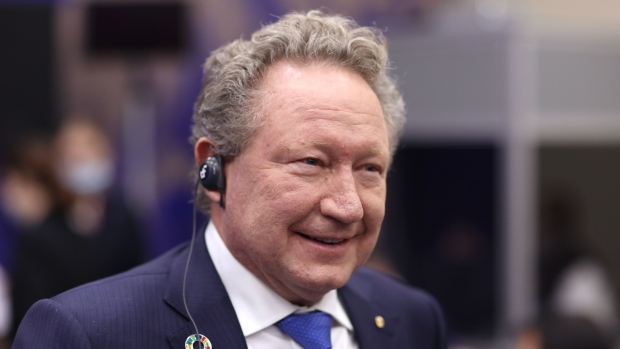 (Bloomberg) -- It took Andrew Forrest a little over a decade to build an iron ore empire to challenge the global majors. Now he’s set himself an equally ambitious timeline to create a global powerhouse in clean energy.

The Perth-based billionaire, widely known as “Twiggy” in Australia, has been scouring the planet’s far-flung regions including Kyrgyzstan and the Democratic Republic of Congo for investment opportunities in renewable power and hydrogen production. He also wants his home country to become a global leader in the nascent hydrogen industry, and earlier this week announced plans to build a giant factory in Queensland to manufacture the equipment needed for its production.

Hydrogen would rival coal as a key input in steelmaking within a decade, Forrest said in a Bloomberg Television interview on Thursday.

“Let’s stop dithering, let’s stop mucking around and make the switch to green as soon as possible,” he said.

Forrest’s deep dive into climate-related businesses comes as the business he founded, Fortescue Metals Group Ltd., sets a 2040 target to reach net-zero greenhouse gas emissions from its steelmaking customers. Now the world’s fourth-largest iron ore producer, it’s unique among its peers in committing to such a goal for so-called Scope 3 emissions. Hydrogen is central to that plan, with the company planning to become a major producer as well as developing technology that uses the clean gas to replace coal-fired blast furnaces.

To hit that target, Forrest, 59, will have to prove his doubters wrong, including BHP Group, the world’s biggest mining company. BHP has said it will work with customers to reduce the carbon intensity of the steelmaking process by 30% over the next decade, but has declined to set a net-zero goal citing the technical challenges facing the industry.

Driving costs down will be key to Fortescue achieving its ambitions. A report by Bloomberg New Energy Finance in August found that most of Australia’s planned hydrogen production in 2030 would be delivered at a price above $4 per kilogram, which would make it hard to compete with other suppliers. “Global demand for clean hydrogen is only just emerging and competition for sales will be fierce,” the report said.

Meanwhile, Forrest’s plans in Queensland put him in direct competition with China -- the global leader in the manufacture of electrolyzers that can make hydrogen that can be stored and transported and eventually converted into carbon-free energy for power or transportation. His push to build out renewable power capacity also pits him against energy majors such as Royal Dutch Shell Plc and BP Plc, which are increasingly focusing their investment on wind, solar and other low-emissions technologies.

“Australia is a global leader in having everything the green future needs -- all the sun, all the wind, all the elements of renewable electricity,” Forrest said. “Nearly 100% of the manufactured items that go into the solar industry come from overseas -- it’s time to stop that. We’re going to be such a massive consumer of PV cells, of wind turbines, everything to build out that green future -- let’s build it right here in Australia.”

Forrest called on Australian Prime Minister Scott Morrison to show leadership on the green transition, including a commitment to attend the COP26 climate summit in Glasgow, which starts later this month. “Our prime minister will become even better known globally, and sadly here, if he doesn’t go because he’ll be seen as the stand-out -- not the COP26, but the cop out.”

Forrest is Australia’s fourth-richest person, with a net worth estimated at $16.3 billion. The great nephew of Baron John Forrest, the first premier of Western Australia state, he grew up on a remote cattle ranch where he did his early schooling via short-wave radio.

After becoming a stockbroker and overcoming an early setback when a nickel project that he helmed failed, Forrest was able to guide Fortescue to iron-ore production in 2008, just when China’s appetite for the steel-making material became insatiable. The task included building the company’s own rail and port infrastructure.

While he stepped down as its chief executive officer a decade ago, he still holds a 29.8% stake in Fortescue through closely held Minderoo Group and remains its chairman. In recent years, Forrest has beefed up his interests in the cattle industry, studied marine science, and promoted indigenous welfare issues and combating modern slavery.

“Andrew has been successful in positioning himself at the forefront of some pretty monumental developments within the resource sector,” said Gavin Wendt, senior analyst at the consultancy MineLife Pty Ltd., noting that Fortescue’s emergence had been well timed to meet a boom in China’s steel industry. “Now he has himself positioned to be a key player in the emerging hydrogen energy industry.”

Fortescue has committed as much as 10% of its annual profit to invest in green initiatives, to be marshaled by its Fortescue Future Industries unit. Forrest wants the company to produce 15 million tons of hydrogen a year by 2030.