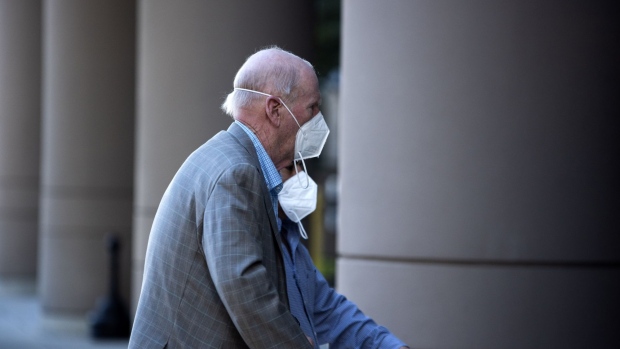 Robert Brockman, the software executive charged in the largest-ever tax case against a U.S. individual, arrives for a competency hearing at the federal courthouse in Houston, Texas, U.S., on Tuesday, Nov. 16, 2021. Brockman was indicted on tax evasion and money laundering charges that accused him of using a complex trust structure in the Caribbean to hide $2 billion in income over two decades. , Bloomberg

(Bloomberg) -- Billionaire Robert Brockman must stand trial for the largest tax evasion case against an individual in US history despite asserting dementia leaves him incompetent, a judge ruled.

US District Judge George C. Hanks Jr. discounted claims that dementia leaves Brockman, 80, unable to help his lawyers defend against a 39-count indictment accusing him of evading taxes on $2 billion of income and other crimes. Brockman’s lawyers argued that his progressive dementia, caused by Alzheimer’s and Parkinson’s disease, has worsened recently. They’ve said they’ll file a new incompetency claim.

“The court finds that despite Brockman’s recent health problems, the government has met its burden of establishing that Brockman is competent to stand trial,” Hanks ruled Monday in federal court in Houston.

Testing shows Brockman is “exaggerating his symptoms of severe dementia and his cognitive abilities are not as poor as reflected by his cognitive test results,” the judge wrote. “In other words, Brockman is malingering to avoid prosecution.”

The judge agreed with prosecutors who claimed that while Brockman has some cognitive impairment, he exaggerated his decline since 2018 as US investigators focused on whether he controlled billions of dollars in a Bermuda charitable trust. They said Brockman functioned at a high level even after his October 2020 indictment. Brockman later stepped down as chief executive of Reynolds & Reynolds, a software company.

The Justice Department has investigated Brockman for five years, and the ruling raises questions about its ability to prosecute wealthy tax defendants. Prosecutors said most of the income he failed to pay taxes on came from investments in Vista Equity Partners, founded by billionaire Robert F. Smith.

An entity tied to Brockman launched Smith into the private equity world with an investment in Vista beginning around 2000 that later grew to at least $1 billion. In 2020, Smith signed a non-prosecution agreement that required him to admit to tax crimes, agree to pay $139 million and cooperate against Brockman.

But prosecution witnesses said that while Brockman may have early Alzheimer’s disease, he faked his dementia for years. In a court filing, prosecutors said he led a double life, “presenting to select doctors as severely cognitively impaired, while simultaneously leading a normal, unimpaired life.”

In an unusual twist, Hanks heard testimony from a UK lawyer, Evatt Tamine, who oversaw Brockman’s offshore holdings for more than a decade. Tamine signed an immunity deal with US prosecutors in 2018. Tamine testified he believed Brockman is innocent of tax evasion and money-laundering charges, while acknowledging he faces his own probes in Bermuda and Switzerland.

Brockman must also contend with the Internal Revenue Service, which imposed a $1.4 billion tax assessment against him in October. In January, he sued the US to halt the agency’s immediate assessment of that levy. Days later, he filed a separate lawsuit in Tax Court.