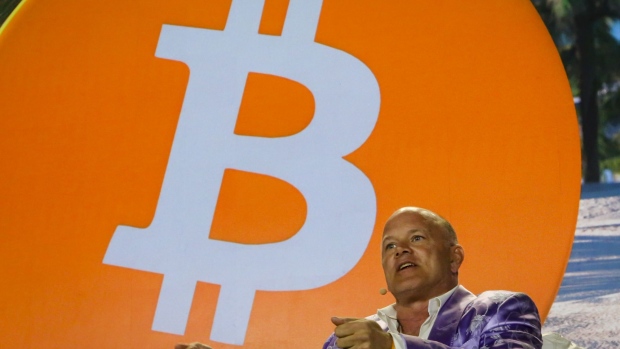 Mike Novogratz, chief executive officer of Galaxy Investment Partners, speaks during the Bitcoin 2021 conference in Miami, Florida, U.S., on Saturday, June 5, 2021. The biggest Bitcoin event in the world brings a sold-out crowd of 12,000 attendees and thousands more to Miami for a two-day conference. , Bloomberg

(Bloomberg) -- Russia’s invasion of Ukraine could prompt more people to turn away from the dollar in a potential boost for cryptocurrencies and local fiat, according to billionaire Mike Novogratz, a long-time crypto bull.

The recent surge in Bitcoin trading using the Russian ruble and Ukrainian hryvnia has bolstered advocates’ case that a decentralized currency can offer refuge when access to traditional banking breaks down. The invasion and sanctions against Russia could push more regular people toward crypto, Novogratz said while making clear that doesn’t imply Bitcoin is being used to avoid sanctions.

“We’ve never had a group of nations in essence confiscate real estate from Russian tycoons,” the founder of Galaxy Digital Holdings said in an interview. “This sends a message: I want to have money that lives outside of traditional power. That’s why Bitcoin was created, because people don’t trust governments.” In contrast, blockchain ledgers are transparent.

The world’s largest cryptocurrency has decoupled from risk-on assets in the past two days, aiding narratives the coin could be viewed as a store of value, uncorrelated to the broader market. While still elevated at 0.55, Bitcoin’s correlation with the S&P 500 has backed down from a high of 0.7 earlier this year, data compiled by Bloomberg show.

Some analysts have attributed sanctions against Russian banks, companies and wealthy elites -- and the subsequent economic fallout -- as driving a rush into digital assets. For onlookers like China, there are lessons to be learned in relying on the U.S. dollar, Novogratz said.

“I’ll tell you one thing, you are going to sell your reserves before you invade Taiwan,” he said. “This is a big deal, in a lot of ways. This is starting the acceleration of de-dollarization of the world.”