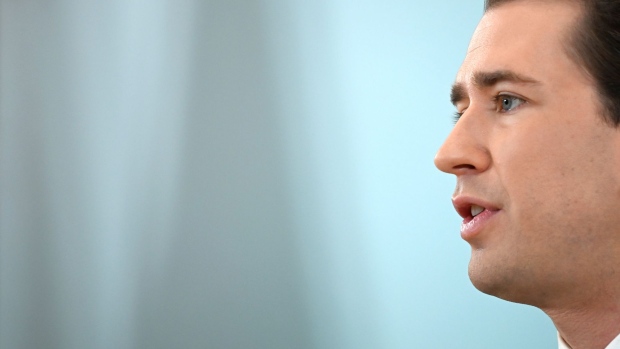 VIENNA, AUSTRIA - DECEMBER 02: Former Austrian Chancellor Sebastian Kurz speaks to the media to explain his decision to step down, effective today, from all political functions on December 02, 2021 in Vienna, Austria. Kurz had already stepped down as Austrian chancellor earlier this year following corruption investigations. Today he is also relinquishing his post as leader of the Austrian People's Party (OeVP). Kurz said his decision was prompted by the recent birth of his son. (Photo by Thomas Kronsteiner/Getty Images) , Photographer: Thomas Kronsteiner/Getty Images Europe

Kurz, who resigned under a cloud of controversy in October and remains under investigation for corruption, is set to start his new role at Thiel Capital LLC in the first three months of 2022, he told the Heute newspaper.

The appointment comes amid multiple criminal probes into Kurz and his inner circle over allegations that he used taxpayer money to plant fabricated public-opinion polls in newspapers to help build his career. He completely withdrew from politics earlier this month, setting off another change in power. Kurz has denied wrongdoing.

Kurz long cultivated connections to Thiel, a conservative power broker. The German-born venture capitalist -- one of the first investors in Meta Platforms Inc.’s Facebook -- has supported Republican candidates in the U.S. and endorsed Donald Trump.

Kurz, 35, is looking to move beyond a blitz career in politics that made him the youngest head of government in Europe. He was touted as a pioneer of populist conservative politics on the continent before his downfall.