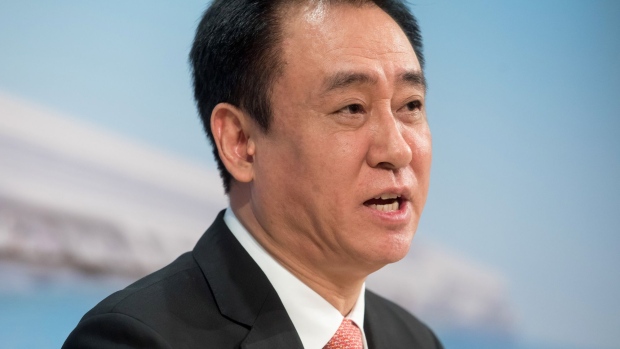 (Bloomberg) -- For years, Chinese real-estate tycoon Hui Ka Yan could count on a set of deep pockets whenever trouble struck: his poker friends.

Now, as Hui’s huge China Evergrande Group teeters on the brink, one of those allies from a group of prominent Chinese property moguls -- Joseph Lau -- is heading for the exit.

The financial world has been watching Evergrande with alarm in recent weeks. The Laus’ retreat is one more sign of Hui’s deepening troubles.

Lau is one of Hui’s poker pals, a small group of property billionaires who regularly played card games together and maintained close business ties. The Evergrande chairman counted on these poker buddies to back his company during times of trouble, whether it was by buying stakes in his company or loading up on its bonds. Others include New World Development Co. billionaire Henry Cheng and C C Land Holdings Ltd.’s Cheung Chung Kiu.

Over time, Hui broadened his circle to raise funds for his property services business in December, as well as an electric-vehicle startup in January.

Read more: The Billionaire Club Behind China’s Most Indebted Developer

Those who supported Hui’s sprawling empire are now paying a price as the group struggles to repay its debts and cover more than $300 billion in liabilities.

Chinese Estates said last week it could take a loss of about HK$9.5 billion if it sold all its Evergrande stock. The company started offloading its shares in Evergrande in August, but the latest sale trimmed its ownership in Evergrande to 4.7%, below the 5% reporting threshold required by the Hong Kong stock exchange.

Evergrande’s crisis is also causing pain for tens of thousands of Chinese households who bought high-yield products sold by the developer. The Shenzhen-based company has already missed payments on 40 billion yuan ($6.2 billion) of wealth products sold to retail investors, sparking protests and putting pressure on Beijing to find a solution and avoid further unrest.

Evergrande rose 8.1% in Hong Kong trading, paring its loss this year to 83%. Chinese Estates rose 3.3%, after earlier reaching its lowest level in more than 18 years.

Lau is worth $6.5 billion, according to the Bloomberg Billionaires Index, down 15% this year partly because of Evergrande and concerns over China’s real estate market. He resigned as chairman of Chinese Estates after he was convicted of bribery and money laundering in Macau in 2014, but still controls about 75% of the company.