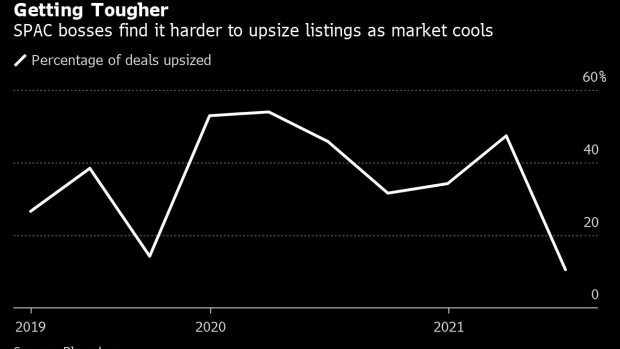 (Bloomberg) -- Property billionaire Barry Sternlicht has once again increased the size of a special purpose acquisition company, a trick that others are finding harder to pull off in a cooling SPAC market.

Sternlicht’s Jaws Juggernaut Acquisition Corp. raised $240 million in its U.S. initial public offering after boosting the size of the deal by 20%, according to a statement late Thursday. The SPAC is the fifth in a series raised by Sternlicht since the beginning of last year -- all with “Jaws” in the name -- and he’s achieved the rare feat of upsizing every one of them.

It’s a sign that after a blowout 18 months for blank-check listings, in which record amounts of capital have been raised for deals across all major sectors, investors are starting to become more selective about where they place their bets and are focusing on serial dealmakers with proven track records.

Only 11% of the SPACs priced in the U.S. this quarter were upsized, down from nearly half of all offerings in the first quarter, according to data compiled by Bloomberg. The strong demand for the latest SPAC from Sternlicht, the founder of Starwood Capital, comes as the overall market slows after the glut of deals and recent regulatory crackdowns.

The listing also marks a return to the limelight for former Qualcomm Inc. boss Paul Jacobs, who left the smartphone chipmaker in 2018. Jacobs serves as chief executive officer of the SPAC, which will hunt for acquisitions in the wireless communications industry.

Jaws Juggernaut says it’s already identified one potential target -- unusual for SPACs that usually start their search after listing. It may consider buying XCOM Labs Inc., the startup that Jacobs founded after leaving Qualcomm, and combining it with another company, according to the prospectus. That would technically comply with SPAC norms as the vehicle wouldn’t buy only XCOM.