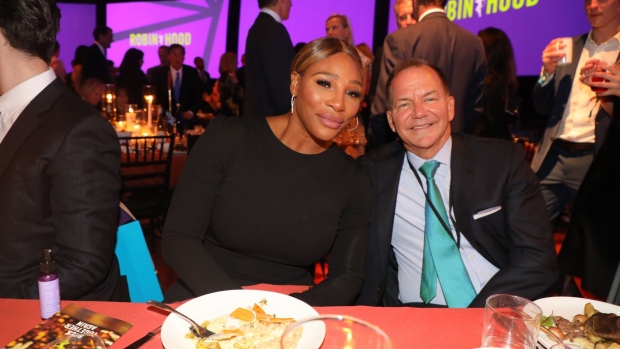 Following along with Mike Novogratz's instructions to meditate. , via Bloomberg

One of them was a Beatle. The other was having a Beatle moment.

Rings of beautiful people formed around Paul McCartney and Eric Adams during the part of the night when the lights were up, waiters were maneuvering 3,000 plates of short ribs to the tables and guests were feeling the high of having just watched Bruce Springsteen sing “Thunder Road,” Alicia Keys perform “Let It Be” and McCartney riff on his love of New York. The Beatle was honored for his role organizing a benefit concert that took place after the terrorist attacks of Sept. 11, 2001.

Adams, the Democratic nominee for New York City mayor, arrived after his first televised debate with his Republican opponent Curtis Sliwa ahead of the Nov. 2 election. Adams’s first stop was with Galaxy Digital Holdings’s Mike Novogratz, the man who’d invited him to the event, and other family members, including the host of the vegan-themed podcast “Species Unite,” who had Adams on last year. There were a few quick photos taken, Novogratz in his bright green Bottega Veneta jacket.

Then Adams was off to say hello to real estate executive Jeff Blau and his venture capitalist wife, Lisa Blau, Robin Hood CEO Richard Buery and Clara Wu, co-owner of the Brooklyn Nets with her husband Alibaba co-founder Joseph Tsai. Each time Adams stopped, a crowd surrounded him, his bald pate peeking out. And then -- poof -- he was gone.

“I didn’t see him, I’d like to meet him,” NFL Commissioner Roger Goodell said, a few minutes before taking the stage with former New York Giants Eli Manning and Justin Tuck.

“He’s the best thing that’s ever happened in this city and I can’t wait,” Jones said.

As the Jonas Brothers began to play the post-dinner concert, Buery recounted Adams’s brief visit. “He had a busy night, the debate before, an event after,” Buery said. “And yeah, he was mobbed, the most popular guy in the room. I’m really excited about what his leadership represents.”

The hope of many Robin Hood supporters is that Adams will guide policy, managerial and funding decisions that help lift up struggling New Yorkers. Along with the progressive Century Foundation, the foundation issued a report this summer titled “From Crisis to Opportunity: A Policy Agenda for an Equitable NYC,” which included ideas about access to child care, workforce development and police reform.

Among the benefit decorations were 10,000 “Robin Hood” MetroCards, which represented the 10,000 actual MetroCards, each loaded with $33, that arrived this week. They will be distributed to some of the 900 nonprofits that the foundation works with, to get into hands that need the transit fare cards the most.

The MetroCards were paid for by the Gray Foundation, founded by Jon Gray, COO of Blackstone, and his wife, Mindy.

“We were thrilled to partner with Robin Hood and the MTA to get New Yorkers moving again, especially those most in need,” Jon Gray said in an email during the event, which he missed to prepare for Blackstone’s earnings Thursday. “We know that turnstiles can be the gateway to opportunity.”

Novogratz, who recently joined Robin Hood’s board, said the most important part of rebuilding New York is making it “inclusive.” Everyone has a role to play, including people who have done well, like him. He gave $25 million to the event, helping increase the total raised to $77.5 million.

He got his own Beatle moment, too, when Jones invited Novogratz on stage after touting his gift. But in a sign of how things might change after a pandemic, instead of pushing up the adrenaline levels in the room, Novogratz worked to calm the crowd.

“I’m gonna ask you guys to do something a little unconventional: We’re all going to meditate real quick. Close your eyes, take a deep breath in, deep breath out. For a moment, just sit here in gratitude. Gratitude for the city.”

Not that Novogratz has lost his verve. During cocktail hour, he shared one of his recent “what New York is all about” moments.

“I was out late at a night club called Little Sister on a Wednesday night at 2 a.m., and I was leaving and I ran into this friend of mine who’s a supermodel from Sudan, and she’s like ‘Come back in!’ and we stayed until 4 in the morning dancing like maniacs,” he said. “I went home with a headache at 4 and I was like ,‘You don’t get this in any city but New York.’”