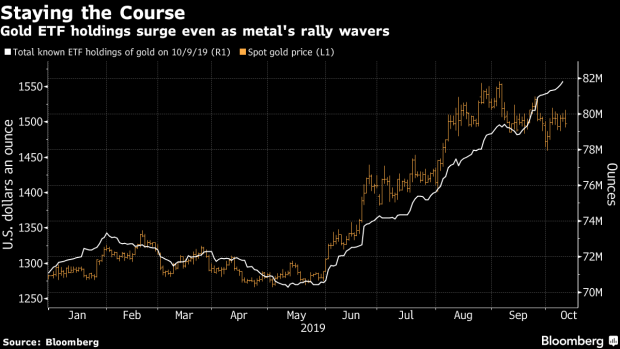 (Bloomberg) -- Greed is rousing from its trade-induced slumber, imperiling billions of dollars lying in haven assets around the globe.

Hopes that the U.S. and China can negotiate a truce as high-level talks progress into a second day are already spurring investors to dive back into risk assets while tempering demand for safety.

Defensive trades -- like dumping trade-sensitive cyclical shares for bonds and gold -- have been in vogue all year. With even hopes of a Brexit deal rising from the ashes, it all raises the specter of a fast reversal, according to market participants.

“Even a limited trade deal between the U.S. and China will send markets into a rabid-risk seeking mode,” said Peter Rosenstreich, the head of market strategy at Swissquote, citing the yen and the Swiss franc as potential losers.

The 18-month deadlock has exacted a heavy toll on the global industrial cycle and business confidence. While few are betting on a comprehensive deal, recession-obsessed investors could be in for a positive surprise.

“Everything is awesome,” Nordea Investment’s Sebastien Galy wrote in a note to clients, predicting a rebound for stocks tied to the manufacturing and investment cycle. “The market underestimates how great this shift is.”

Fund flows this year point to crowded positioning in fixed income as well as little appetite for equities, suggesting that the bar for a risk-on rotation might be lower than in the past. In the week through Oct. 9, investors extended the year-long trend of exiting equities and piling into bonds and money markets, Bank of America Corp. strategists wrote in a note citing EPFR Global data.

Money-market funds have lured $322 billion in the past six months, the largest inflow since the second half of 2008 amid a “bearish paralysis,” the strategists said. Within equities, European and emerging markets may be beneficiaries of improving sentiment -- both are sensitive to global trade and have seen persistent outflows in recent months.

Meanwhile, this week’s sell-off in Treasuries and bunds could finally kick off a winning streak for bond bears who’ve been lashed all year by a ferocious rally. China is Germany’s most-important global trading partner so good news for emerging markets could be just the ticket to boost European growth and inflation expectations at epic lows.

“Yen and bonds would come under pressure on a trade deal,” said Chris Chapman, portfolio manager at Manulife Investment Management. “It feels like we’ve been here before, but the tone from both sides over last 24 hours does seem conciliatory."

Stock investors loaded up on defensive trades could get whiplashed by shifts in the economic and monetary outlook spurred by a breakthrough on trade.

All year the fixed-income rally has pumped havens in the stock market including so-called bond proxies -- companies with steady dividend payouts. U.S. utilities, for instance, are trading 1% away from an all-time high. The sector is now trading near records versus the coming year’s forecast earnings. By that measure consumer staples are also near the priciest in more than 18 months.

Gold’s recent retreat from a six-year high -- spurred by a stronger dollar and trade optimism -- has not deterred investors from piling in. Holdings in bullion-backed exchange-traded funds rose for 19 sessions in a row on Thursday, the longest run of inflows since 2009. Any signs that the Federal Reserve may not cut rates as sharply as expected thanks to an improving global backdrop would also temper gold’s rally, as seen on Thursday.

--With assistance from Justina Vasquez and Michael Msika.

To contact the editors responsible for this story: Samuel Potter at spotter33@bloomberg.net, Sid Verma, Cecile Gutscher