Still optimistic on stocks with U.S. earnings season getting underway

The near US$1 trillion chunk of exchange-traded funds known as smart beta has got a problem: Some of the most popular don’t seem that smart.

More than US$14 billion this year has flooded into five of these quant strategies, which are wrapped up in an ETF in a bid to blend active and passive investing. Yet about US$5 billion of this went to funds that barely deviate from the stock market, according to Bloomberg Intelligence. The smart-beta products with the purest exposures to systematic factors actually recorded outflows.

The implications of this multi-year trend could be major for an industry that’s swelled to a fifth of America’s US$4.4 trillion ETF market. Legions of investors may not be getting the diversification they’re paying for, while those who are sour on the smartest funds as key strategies misfire. 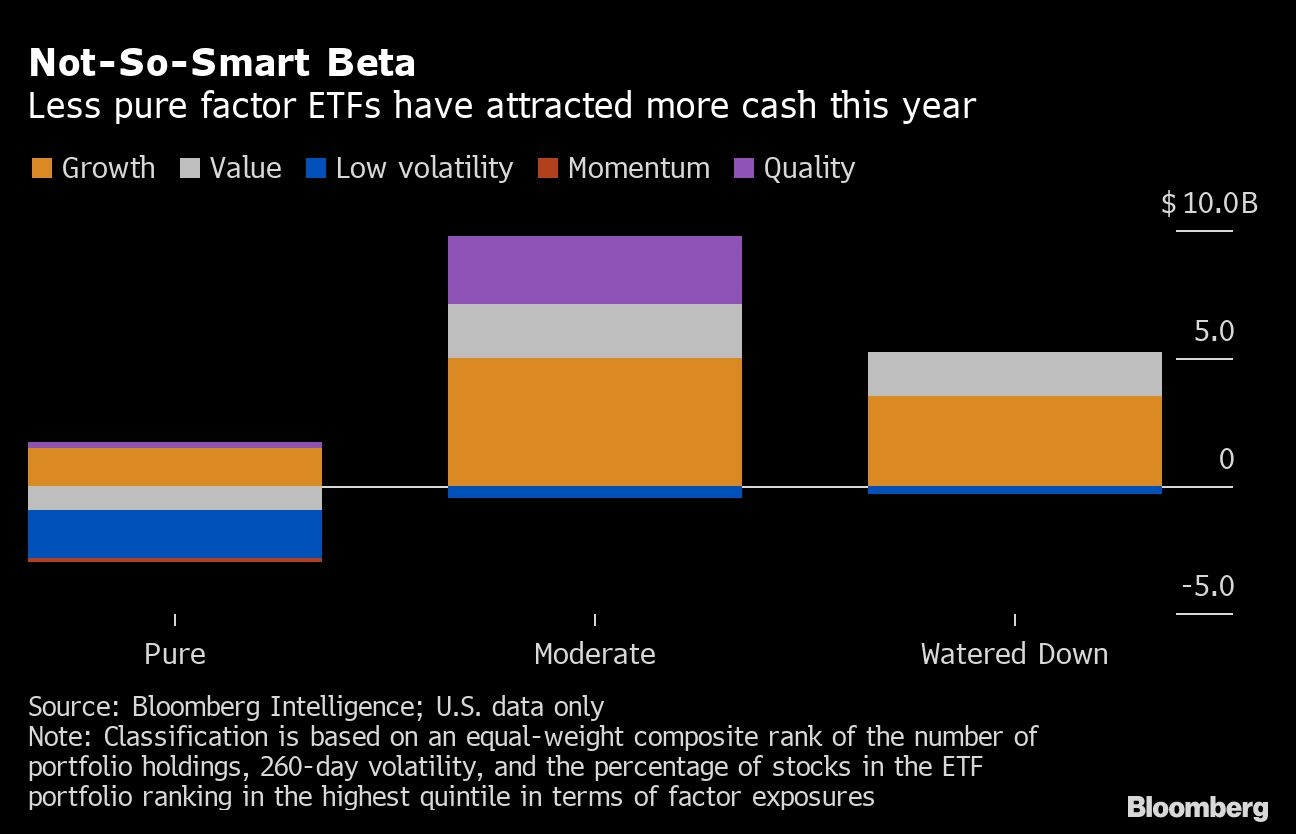 It highlights the headwinds providers face as they struggle to convince investors to ditch cap-weighted benchmarks and adopt next-generation products.

“The flows basically show investors are hesitant to take on large concentrated bets,” said Athanasios Psarofagis, an analyst at Bloomberg Intelligence. “It’s a balance between picking a product that’s more true to the craft versus what’s easier to fit into a portfolio.”

Born from the work of Nobel laureates and pitched by the biggest firms on Wall Street, smart-beta funds are an attempt to capture potential excess returns by following academically proven quantitative strategies.

Where index ETFs weight companies by their market capitalization, a smart-beta version would typically select and weight constituents based on factors such as profit growth or relative cheapness.

Yet most watered-down funds -- those behaving most like the stock market overall and with a portfolio least representative of their factor -- have lured US$40 billion over the past three years, according to Bloomberg Intelligence. Their most-pure peers, which tend to be more volatile but offer larger factor exposures, netted just US$7 billion. 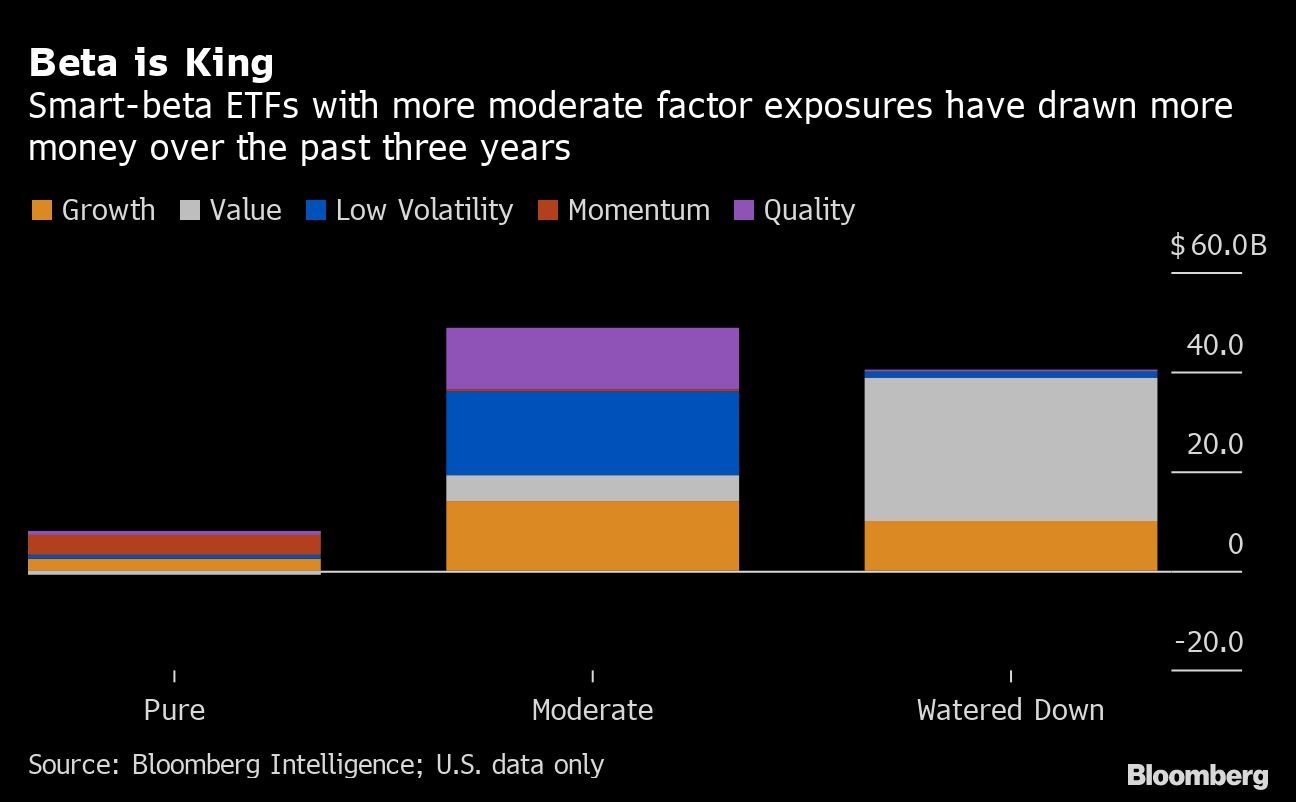 One reason: It’s becoming ever-more painful for advisers and allocators to deviate from major benchmarks.

For instance, a few mega-cap tech companies increasingly dominate the S&P 500, helping the latter beat value and small-cap indexes by at least 50 percentage points over the past decade. The trend intensified this year as fears over the economic impact from the coronavirus spurred investors to take refuge in large growth stocks.

“Investors want a different experience than a cap-weighted approach, but they also don’t want to deviate too much from the market,” said Todd Rosenbluth, CFRA Research’s head of ETF and mutual fund research. “From an adviser’s perspective, it’s a lot harder to explain why something that’s intended to be a better investment experience than a cheap, market-weighted product underperforms so much.”

Of course, even the purest ETFs can’t exactly mimic the academic portfolios that inspired them. The original models envisaged by Nobel Laureate Eugene Fama and Kenneth French are meant to have both long and short positions, but that’s pricey and more complex to implement, so smart-beta ETFs usually take a long-only approach.

Either way, several major factors have struggled in 2020, according to market-neutral Bloomberg indexes. Value is down almost 8 per cent, while momentum shares and dividend payers are barely changed.

For factor advocates, underperformance is par for the course. The strategies are intended to work over very long time horizons, and lengthy periods lagging the market should be expected, though even the most loyal quants are voicing concern at the protracted bout of pain for factors such as value.

That’s partly why purer factor ETFs have struggled to lure more money -- deviation from benchmarks has generally not been rewarded since the last crisis.

Meanwhile, methodology can have a major impact on performance even when two strategies track the same investing style. The average one-year performance gap between the best- and worst-performing value ETFs is 16 percentage points, says Psarofagis at Bloomberg Intelligence.

The latter naturally looks very different from any equity benchmark, and has also dropped twice as much as VTV over the past year.

The way Alpha Architect founder Wes Gray sees it: His firm’s funds are like a concentrated detergent that investors can dilute however they want. They might deviate more from the benchmark, but that’s necessary if investors want to capture factor premiums.

“If you believe in academic research, if you think it makes sense, we’re going to be the way you capture it in its purest form possible,” he said. “That’s a double-edged sword obviously.” 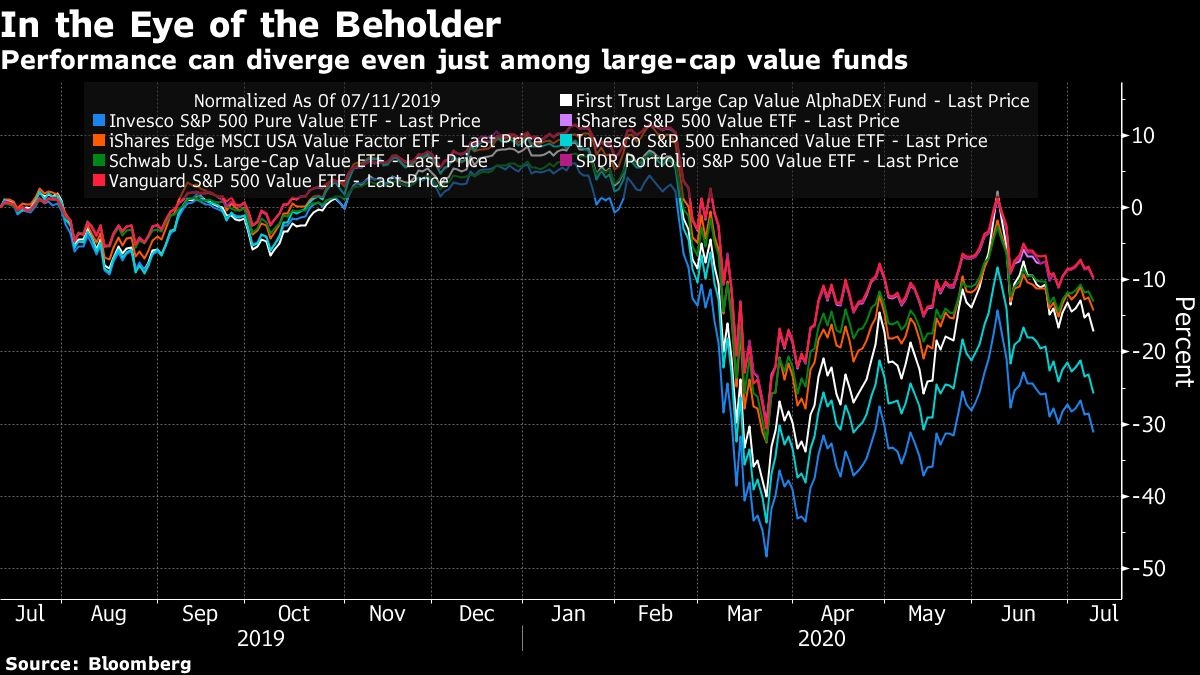 Some watering down may be inevitable -- or even desirable from clients’ perspective.

“Advisors and institutions are oftentimes tied to how much tracking error they can take,” said Psarofagis. “So they naturally have to gravitate to the watered-down products that are easier to slip into a core allocation.”

Still, the degree to which long-only funds are acting like the broader market is striking. The 10 largest smart-beta ETFs all have a one-year correlation with the S&P 500 of at least 0.97, with 1 denoting perfect synchronicity.

The phenomenon is not limited to the exchange-traded market. An academic paper published last month studied smart beta across both ETFs and mutual funds and concluded that about a third of products are essentially market-index funds, and even argued that their names are misleading.

Many would argue academic research can’t be directly translated into products, and even Fama-French models have come under fire in recent years amid persistent underperformance. And with the pandemic whiplashing systematic trades, diversification is harder to find. Evercore ISI analysis last week showed macro forces were driving 78 per cent of the moves in the S&P 500.

Ultimately then, investors would be wise to make sure they’re not paying a premium for products that in practice can act like a cap-weighted index tracker.

“The extra fees investors are paying for these funds should justify the extra factor exposures they’re getting,” said Vitali Kalesnik, head of equity research at Research Affiliates LLC, a smart-beta pioneer.