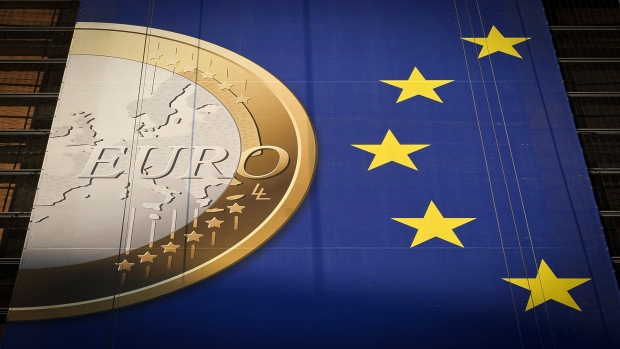 A giant euro banner, featuring an image of a euro coin and promoting stronger European economic governance, hangs on the side of the headquarters of the European Union commission at the Berlaymont Building, in Brussels, Belgium on Monday Nov. 21, 2011. , Bloomberg

European regulators are cracking down on complex dividend-tax transactions after years of trades cost national treasuries tens of billions of euros and sparked probes into some of the region’s top banks.

The European Banking Authority said bank employees seeking senior management roles should be scrutinized for any role in dividend-arbitrage, which includes so-called Cum-Ex transactions at the center of a European Union-wide scandal, and other trades known as Cum-Cum. The deals may have cost taxpayers some 55 billion euros ($60 billion) between 2001 and 2012, according to the European Parliament.

Bank supervisors were told to investigate the trades in their review of lenders’ compliance with anti-money-laundering rules, and the EBA said Tuesday it would start a new inquiry into compliance with the guidelines.

The EBA, which sets banking standards across the bloc, found in a report that regional supervisors have vastly different policies on the dividend trades with some paying little regard to the risks of the transactions.

Dividend-arbitrage trades target anomalies in the withholding taxes that governments levy on payments made to corporate shareholders. In a typical transaction, a stockholder lends shares before the dividend date to a party in another jurisdiction where the tax hit will be smaller. After the payout, the party hands back the stock and they split the tax savings. Investors can also use bespoke derivatives known as total-return swaps for the trades.

Cum-Ex is a more aggressive form of dividend arbitrage in which multiple people claim ownership of the same shares and the right to a refund of withholding taxes. Jurisdictions across Europe have probed the trades and in Germany, where lawmakers estimate the transactions cost taxpayers about 10 billion euros, a judge last year called them illegal.

Other forms of dividend arbitrage often aren’t illegal and proponents have described them as a legitimate way for investors to boost returns. The U.K.’s Financial Conduct Authority permits the activity as long as the intention is the legal “minimizing of withholding taxes,” according to a 2017 report.

Yet the practice is controversial. The U.S. Internal Revenue Service cracked down on the business in 2008 after senators accused banks including Citigroup Inc. and Deutsche Bank AG of concocting trades that denied taxpayers billions of dollars over a decade. The FCA criticized firms in its 2017 report for not carrying out enough due diligence and noted that there’s a risk they could be involved in “potentially criminal” activities.

The EBA said that as of May 2019 only two supervisors considered if the trades could result in money-laundering risks. Eight of 28 supervisors said the schemes were illegal, one said they were not and the rest said they weren’t crimes under domestic tax law though might be based on court rulings. When authorities acted, they did so once risks had already materialized and even then they took a “narrow view” of the repercussions.

For more than a decade, dozens of bankers, brokers and lawyers exploited how Germany once taxed dividends in what’s come to be called the Cum-Ex affair. Prosecutors in Cologne have said more than 600 people face scrutiny, and Deutsche Bank said in March that five former management board members are under investigation.

The transactions involved the rapid sale of shares just before a company paid a dividend. This allowed multiple investors to claim a tax refund on the same dividend payment, according to authorities. The practice was named after the Latin term cum/ex, meaning with/without, because the stocks were sold with and delivered without a dividend payment.