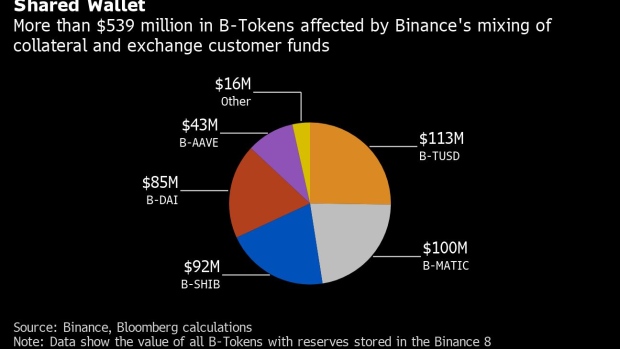 (Bloomberg) -- Binance Holdings Ltd., the world’s largest crypto platform, acknowledged that it mistakenly keeps collateral for some of the tokens it issues in the same wallet as exchange-customer funds.

Reserves for almost half of the 94 coins that Binance issues, known as Binance-peg tokens or “B-Tokens,” are currently stored in a single wallet called “Binance 8” which also holds customer assets, according to listings visible on its website on Monday. The wallet contains significantly more tokens in reserve than would be required for the amount of B-Tokens that Binance has issued, indicating that collateral is being mixed with customers’ coins rather than being stored separately, as has been done for other Binance-peg tokens according to the company’s own guidelines.

“‘Binance 8’ is an exchange cold wallet. Collateral assets have previously been moved into this wallet in error and referenced accordingly on the B-Token Proof of Collateral page,” a Binance spokesperson said in a statement to Bloomberg News in response to questions on the matter. “Binance is aware of this mistake and is in the process of transferring these assets to dedicated collateral wallets.”

Crypto exchanges such as Binance have attempted to be more transparent about their holdings following the collapse of rival platform FTX in November, which turned the management of reserves into a hot-button issue for the crypto industry. FTX, the Bahamas-based exchange founded by Sam Bankman-Fried, allegedly allowed its sister trading firm Alameda Research unfettered access to customer assets to fuel its own bets — and with billions of dollars at stake, customers are eager to spot any potential warning signs of trouble elsewhere.

The FTX scandal has prompted a crisis of confidence in exchanges, with customers withdrawing their assets from platforms. In response, exchanges have moved to showcase holdings in so called proof-of-reserve reports, some with additional visibility supplied by blockchain data. While these disclosures offer a brief snapshot of how much exchanges hold, they fall short of fully audited financials by not including information on a platform’s liabilities or any data observed over a longer period of time.

Cryptocurrencies are often only compatible with the blockchain they were built on, meaning developers have had to figure out ways that allow them to use tokens like Bitcoin elsewhere. Binance mints billions of dollars’ worth of its own versions of third-party tokens like Ether, Circle’s USDC and Tether’s USDT to make them usable on other blockchains, such as the platform’s own BNB Smart Chain and BNB Beacon Chain.

Those B-Tokens are supposed to be backed one-to-one by locked reserves of the coins they’re based on, and reserves should be stored in dedicated wallets to keep them separate from customer and exchange funds, according to processes posted on Binance’s website. B-Tokens typically do not involve oversight or direct participation from the coins’ original creators.

More than 40 B-Tokens are listed as using Binance 8 to store their reserves — a type of address known as an exchange wallet, where platforms like Binance store customer assets. The wallet is listed as a reserve for Binance-peg versions of several major cryptocurrencies, including MakerDAO’s DAI and MKR coins, Aave, Uniswap’s UNI and Polygon’s MATIC.

The lack of segregation means that it’s difficult to verify how many coins Binance holds in reserve to meet potential redemption requests for the number of B-Tokens it has minted.

The spokesperson said that all user assets held with the exchange “have been and continue to be backed 1:1,” notwithstanding what Binance called “historical operational oversights.” Binance did not specify when the issue with Binance 8 was identified.

Binance has issued more than $539 million in total of the 41 B-Tokens that have Binance 8 as their collateral wallet, according to calculations by Bloomberg based on Binance data from Jan. 20, while the wallet itself holds more than $1.8 billion in related assets. Overall, Binance 8 contains more than $16.5 billion in various crypto tokens beyond those linked to B-Tokens, according to data from crypto intelligence platform Arkham.

That means some B-Tokens in the wallet have far more collateral than would be necessary. For example, Binance 8 had a reserve of almost 22,700% for OriginToken’s OGN on Monday, and 18,Billio001% in reserve for Loopring’s LRC.

Binance previously acknowledged historical issues with insufficient backing for the B-Token of its branded stablecoin BUSD, which saw the Binance-peg version left with more than $1 billion in missing assets on several occasions — an error that the spokesperson said could now be attributed to the exchange having misidentified the correct collateral wallets.

The issue was first spotted by blockchain analytics firm ChainArgos on Jan. 17. Jonathan Reiter, a ChainArgos co-founder, said the excessive overcollateralization of some B-Tokens and Binance’s use of the Binance 8 wallet showed “obvious mixing of client and peg-backing funds.”

Binance issued its first proof-of-reserves report conducted by audit firm Mazars late last year, but has yet to publish any further reports after Mazars ended the practice due to market dissatisfaction with the level of detail such reports could provide. Andrew Thurman, an analyst at crypto data firm Nansen, said the rise in crypto literacy among investors would likely result in more errors like this one being discovered in future.

“This is what happens when you combine even incomplete, token gestures to transparency like Proof of Reserves with a growing army of on-chain literate observers,” Thurman said in a tweet on Tuesday.

(Updates with reaction in final paragraph.)