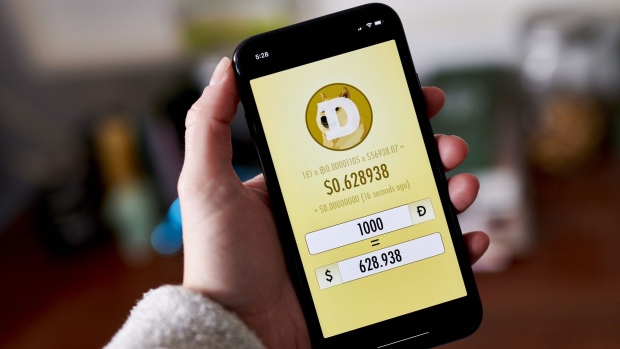 The Dogecoin website on a smartphone arranged in the Brooklyn borough of New York, U.S., on Friday, May 7, 2021. Dogecoin, a cryptocurrency conceived as a joke but now the world's fifth-most valuable, plunged from an all-time high after its most famous cheerleader, Elon Musk, jokingly called it "a hustle" on late-night TV. , Bloomberg

(Bloomberg) -- Binance has fully opened withdrawls of Dogecoin after a technical glitch that spurred a heated back-and-forth between Elon Musk and the exchange’s chief executive officer.

Traders were unable to withdraw Dogecoin for more than two weeks because of problems related to a network upgrade, according to a statement on Monday. Binance, the world’s biggest crypto exchange, said the glitch was “an unlikely and unfortunate coincidence” and “not quite the shady circumstances that some had suggested.”

That appears to be a reference to Musk’s allegation on Twitter last week that the issue “sounds shady.” In response, Binance CEO Changpeng “CZ” Zhao posted a link to a story about Musk’s Tesla Inc. recalling nearly 12,000 cars as the result of a software glitch.

Read more: Musk Trades Barbs With Binance and Its CEO Over Dogecoin Glitch

“No single entity was at fault, neither Binance nor DOGE Network had prior knowledge of this rare issue. So rest assured, as CZ said - no one’s getting fired,” the Binance post said, linking back to an update from Zhao last week where he had made that vow.

Dogecoin, a memecoin that was created as a joke in 2013, is down about 30% in the past 30 days, according to CoinGecko pricing. It has gained about 6,000% in the past year, spurred by frenzied trading and wider cryptocurrency acceptance.