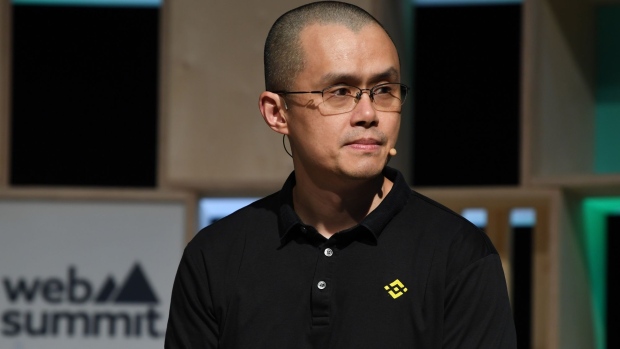 Changpeng Zhao, billionaire and chief executive officer of Binance Holdings Ltd., during a session at the Web Summit in Lisbon, Portugal, on Wednesday, Nov. 2, 2022. The Web Summit runs from 1-4 November. , Bloomberg

(Bloomberg) -- Crypto mogul Changpeng “CZ” Zhao’s vow to set up a recovery fund of up to $2 billion to help cash-strapped startups failed to dispel all the sector’s contagion fears following the collapse of the FTX exchange.

In an interview Thursday with Bloomberg Television’s Haslinda Amin, Zhao gave more details on the deals his Binance Holdings Ltd. is examining in the wake of rival FTX’s bankruptcy. Key to Zhao’s plan is a fund with co-investors aimed at backing promising crypto projects facing a liquidity squeeze.

“We’re going with a loose approach where different industry players will contribute as they wish,” he said, flagging a possible $1 billion for the fund. A later blog post explained the commitment could rise to $2 billion if needed.

Zhao said he’s seeking to limit damage to the crypto sector from FTX’s implosion -- an event the Binance chief himself helped accelerate with a Nov. 6 tweet about plans to sell a $530 million holding of FTX’s native digital token. Before his empire fell, FTX founder Sam Bankman-Fried had agreed to several now stranded deals, such as the purchase of bankrupt lender Voyager Digital.

The industry remains anxious about the fallout from FTX’s wipeout.

“There’s too much uncertainty in the market for the recovery fund itself to be the catalyst that turns everything around,” said Hayden Hughes, chief executive of social-trading platform Alpha Impact. “We still don’t know the extent of the contagion. But I think we are at or close to the bottom and I don’t expect markets to go down much from here.”

Binance’s prospective contribution to what it’s calling the Industry Recovery Initiative also far outweighs the commitments from other firms, at least so far.

“The market will be watching the fund’s public wallet address closely to see whether it attracts a material amount of non-Binance capital, as this will indicate how broad-based the industry support is for stabilization,” said David Adams, portfolio manager of the King River Digital Assets Fund.

Zhao’s credibility as industry savior is a topic of controversy because of his role in FTX’s undoing, as well as investigations into the company from Singapore to the US. Members of UK Parliament have asked Binance to explain the circumstances surrounding Zhao’s Nov. 6 tweet, and whether the company understood the potential impact it might have.

Another source of tension is that while Binance has licenses in many different jurisdictions, it isn’t formally based anywhere. When asked about the matter in the Bloomberg interview, Zhao demurred, saying only that Dubai and Paris are now its “global hubs.” The crypto billionaire moved to Dubai last year.

Zhao said Binance US is planning to revive its bid for the assets of Voyager, a deal which came back into focus after FTX filed itself for bankruptcy. Binance will be competing with crypto exchange CrossTower Inc. and other companies for Voyager.

Binance is also in talks with Genesis Global, the US-based cryptocurrency broker which is seeking emergency funding to stay afloat, Zhao said. The troubled brokerage has $2.8 billion in outstanding loans on its balance sheet, with about 30% of its lending made to related parties including its parent company, Barry Silbert’s Digital Currency Group.

Zhao said a Genesis collapse might only impact some large institutional players and sought to downplay the potential damage to the industry as a whole.

“There will be pain whenever one player goes down,” he said.

With FTX now in bankruptcy, Zhao’s interactions with his former competitor is coming full circle. Binance initially agreed to buy FTX as it started crumbling, then pulled out after Zhao realized what a precarious state Bankman-Fried’s exchange was in.

Binance did not have access to all of FTX’s books or trading history and could not trust the information it provided, Zhao said in the interview. The exchange is now planning to look at FTX’s assets as they come through bankruptcy proceedings, he said.

--With assistance from Philip Lagerkranser.