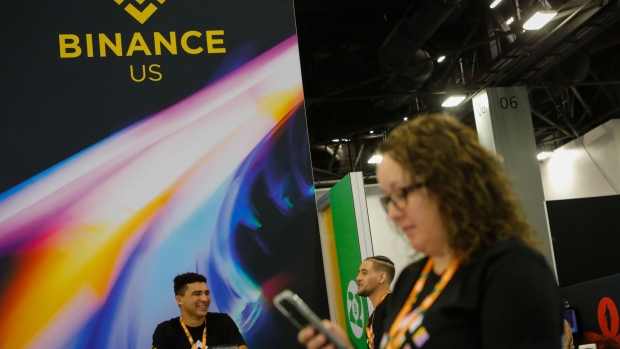 A Binance booth during the Bitcoin 2022 conference in Miami, Florida, U.S., on Thursday, April 7, 2022. The Bitcoin 2022 four-day conference is touted by organizers as "the biggest Bitcoin event in the world." Photographer: Eva Marie Uzcategui/Bloomberg , Bloomberg

(Bloomberg) -- Binance.US, the American affiliate of the largest global crypto exchange, is starting to offer zero-fee trading for Bitcoin, with plans to eliminate the charges for more tokens in the future.

“Since inception, we have been known for our really low fees,” Binance.US Chief Executive Officer Brian Shroder said in an interview. Zero-fee trading is “something that we want to do because we can. This will generate positive user sentiment that will bring us new users.”

The move will increase pressure to lower fees for other crypto exchanges, such as Coinbase Global Inc. Wall Street analysts including Dan Dolev of Mizuho Securities have said that Coinbase will have to trim fees as competition heats up.

Binance.US is also not earning a spread on no-fee transactions, said Shroder. That differs from Robinhood Markets Inc., which offers free-commission crypto trades and earns money by receiving rebates from venues to which it routes retail users’ orders.

“We take no spread, because we are not involved in the transaction,” Shroder said. The move is an investment to attract more users and generate revenue from other sources, such as a newly launched staking service, he said.

Users can see a live order book on the platform for matching trades, Shroder said. Over time, Binance.US expects to add more tokens to its free trading category.

In April, Binance.US raised about $200 million in a seed round that valued the company at $4.5 billion. Its 24-hour trading volume was $239 million as of Tuesday, according to data from Coingecko.com. Coinbase, which includes users beyond the US, traded $1.8 billion in the same period.