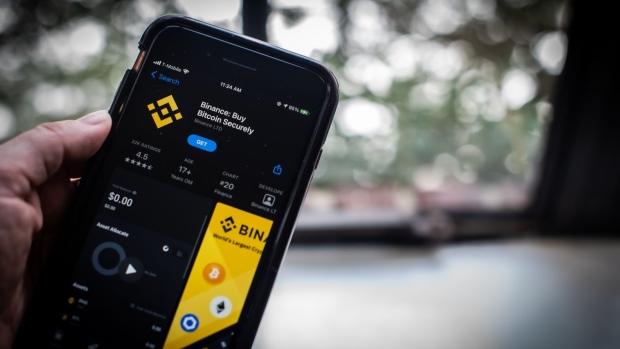 The Binance Exchange application for download in the Apple Inc. App Store on a smartphone arranged in Dobbs Ferry, New York, U.S., on Saturday, Feb. 20, 2021. Bitcoin has been battered by negative comments this week, with long-time skeptic and now Treasury Secretary Janet Yellen saying at a New York Times conference on Monday that the token is an “extremely inefficient way of conducting transactions.” Photographer: Tiffany Hagler-Geard/Bloomberg , Bloomberg

(Bloomberg) -- Cryptocurrency exchange Binance is working to build its U.K. business after the country’s regulator told it to halt operations earlier this year, the company’s chief executive officer told the Sunday Telegraph newspaper.

Binance aims to become a registered crypto asset firm in the country in six to 18 months, CEO Changpeng Zhao told the newspaper. The move would allow the world’s biggest cryptocurrency exchange to offer a wider array of products if it can overcome British anti-money laundering standards that have stymied the industry.

The effort follows a rebuke by the U.K.’s Financial Conduct Authority on Binance’s British entity in June amid a crackdown on the cryptocurrency industry. The financial watchdog ordered Binance to remove advertising and make it clear on its website that the company isn’t permitted to operate in the U.K.

Since then, Binance hired a couple hundred compliance employees to staff an office in the country, Zhao told the newspaper.

With approval from the regulator, Binance could offer products such as futures and derivatives in the U.K., Zhao said.