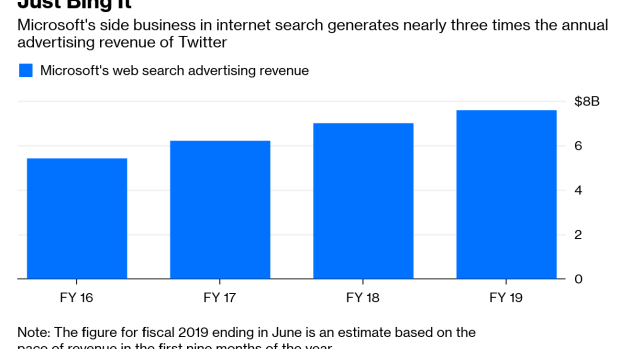 (Bloomberg Opinion) --  I’d like to share birthday wishes for one of the most ridiculed technology products ever. This week in 2009, Microsoft Corp. rebooted and renamed its failed effort to counter Google’s search engine as Bing. It was not a great start.

Steve Ballmer, chief executive officer of Microsoft at the time, shouted “BINGGGG!” at a technology conference to introduce his revamped service. Microsoft marketing materials referred to Bing as a “Decision Engine.” Get it? Google was where people searched for things, but Bing was for finding answers. It was all a little sad.

You know a twist is coming, right? What seemed like a typical Microsoft reaction to fear of Google has become — with the help of blood, sweat, tears and the Nadellaissance — a nice business.

Microsoft now generates about $7.5 billion in annual revenue from web search advertising. That is a pipsqueak compared with Google’s $120 billion in ad sales over the last 12 months. But it’s more revenue brought in by either Microsoft’s LinkedIn professional network or the company’s line of Surface computers and other hardware.

How did Bing go from a joke to generating nearly three times the advertising revenue of Twitter? Bing is emblematic of what Microsoft has become under Satya Nadella, the CEO since 2014: less flashy and less inclined to tilt at windmills in favor of pragmatism.

Microsoft in recent years outsourced chunks of its advertising business and stuck Bing in spots that Microsoft controls or that Google couldn’t grab. Importantly, Microsoft made Bing front and center for people using search boxes on Windows computers and Office software, practically guaranteeing that a healthy share of PC owners would wittingly or unwittingly use the “decision engine.”

Research firm comScore estimates Microsoft accounts for a little under one-quarter of U.S. web searches conducted on desktop computers. Microsoft’s market share is far smaller outside the U.S. and practically nonexistent on smartphones.

Microsoft lost arrangements under which Bing handled some queries that people asked Apple Inc.’s Siri voice assistant, but this year it struck a deal to handle searches and ads tied to searches on Yahoo, AOL and other Verizon Communications Inc. internet properties. Those aren’t glamorous corners of the internet, but they have a lot of traffic and therefore a lot of people searching for running shoes and local dentists. All that helps use of Bing and lifts the ad revenue that flows through Microsoft’s accounts.

Microsoft has also pared costs to the point where Bing stopped bleeding red ink. And this article detailed some of the nooks where Microsoft is outdoing Google and Facebook Inc. such as targeting for business-to-business digital advertising.

I wrote a piece a few years ago about Bing’s quiet success, and it remains true. I’m still not sure, however, how well Bing fits inside a company increasingly focused on selling software and cloud-computing services to other companies. Not all is well financially, either. Microsoft said in April that growth in its search advertising revenue, excluding money that Microsoft must give to partners that direct searches to Bing, rose 12% from a year earlier. The comparable growth rate was 17% for the much larger Google ad business.

Bing at least stands on its own two feet, and company executives have said that Microsoft has learned from the search business how to run big data-collecting and crunching technologies. Microsoft and its corporate customers also have to stay on top of developments with digital helpers such as Siri and Microsoft’s Cortana, and Bing may aid Microsoft there as well.

Oddly, Bing’s transformation gives a leg up to Google parent company Alphabet Inc., too. Absent Bing, Google would be an obvious monopolist in web search. And after years in which Microsoft tried to push Google into regulatory fire, the companies’ war has turned into peace. Google no longer has to worry about Microsoft tattle-telling on its powerful ad business.

Bing may remain a side gig for Microsoft, and certainly it failed as the strategic counter strike to Google. But birthdays are best if you don’t think about what might have been and instead appreciate what you have. So happy birthday, Bing. You’re not the laughingstock of technology anymore.