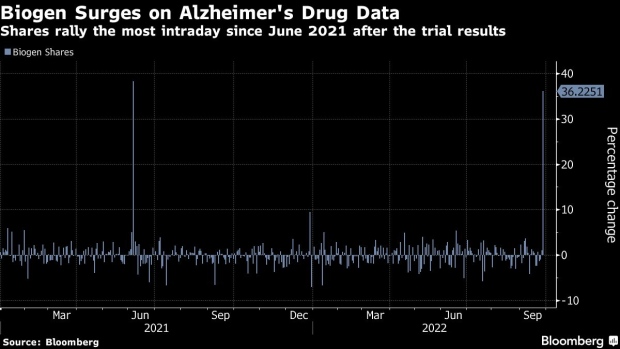 (Bloomberg) -- Biogen Inc. rose the most since November 2020 after a key clinical trial with its partner Eisai Co. showed the therapy lecanemab slowed the progression of Alzheimer’s disease.

The stock jumped 40%, reversing this year’s decline and adding more than $11 billion in market value, after the clinical win. Other firms developing treatments for the disease are also higher Wednesday in the wake of the data, helping lift a gauge of biotechnology stocks to its best day since Aug. 4.

Biogen shares had been rocked over the past few years by developments around its controversial Alzheimer’s treatment Aduhelm, which won approval from the FDA last year but was hit by limited coverage from Medicare. Now, analysts are turning more bullish on the company after its lecanemab trial met the main goal, with at least a trio of brokers upgrading the stock to buy-equivalent ratings as the data increases the likelihood of regulatory success.

“The reported data is pretty much a best-case scenario that not only should lead to approval and reimbursement but could make it challenging for competition (assuming any are successful) to match,” Baird analyst Brian Skorney wrote in a note.

Biogen’s partner Eisai soared 17% in Tokyo, while BioArctic AB, which the therapy was originally licensed from, surged more than 170%.

Other companies developing treatments for the neurodegenerative disease have gained. Eli Lilly and Co., which is studying donanemab for early Alzheimer’s, climbed 7.5%, the most since December, to close at a record high level. Prothena Corp. surged 88% and Acumen Pharmaceuticals Inc. jumped 104%, each posting their biggest gains on record.