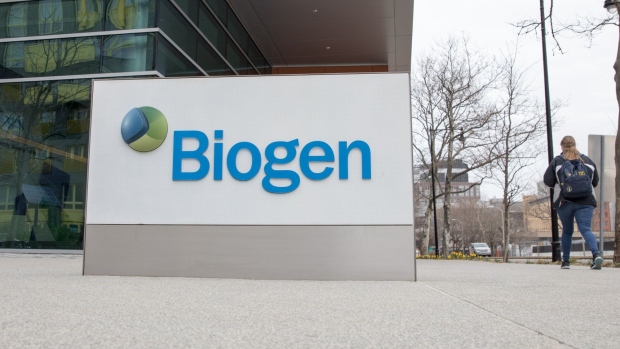 A pedestrian walks past the Biogen Inc. office in Cambridge, Massachusetts, U.S., on Thursday, March 12, 2020. So far, 77 coronavirus cases have been linked to a conference Biogen held in Boston on Feb. 26. Photographer: Scott Eisen/Bloomberg , Bloomberg

(Bloomberg) -- Biogen Inc.’s experimental Alzheimer’s disease therapy failed to gain support from a panel of U.S. Food and Drug Administration advisers on Friday, putting the drug at a crossroads as the agency weighs approval.

The advisers voted 8 to 1, with 2 undecided, that data from a single clinical trial with positive results was insufficient to show the drug works in light of conflicting evidence from a different trial. The vote contradicts a report FDA reviewers prepared ahead of the meeting that supported the efficacy of the drug, called aducanumab, though there was dissent in the agency.

Shares of Biogen were halted on Friday. On Wednesday, the stock surged 44% after the upbeat assessment from the FDA staff, though some of those gains were given back Thursday, when Biogen slid 7.5%.

The advisory committee’s recommendations are not binding on the FDA. The agency often calls on panels of experts, including researchers, medical professionals and patient representatives, when it is considering whether to approve a new drug.

The FDA hasn’t followed the typical process for advisory panels this time, starting with posting a joint report with Biogen on aducanumab’s clinical trial data ahead of the meeting. Usually, the FDA posts its own report outlining staff’s review of the data.

The agency declined to answer questions on why it combined the report and whether Biogen was able to review it prior to it being made public. The agency also gave panel members the option to vote undecided when typically it asks for yes or no answers.

The therapy has had a tumultuous path to FDA consideration. Biogen halted its study of the drug in March 2019 on signs it wouldn’t work, then revived it in October that year after it said a review of data in one of two trials showed it was successful.

Biogen, based in Cambridge, Massachusetts, presented data from the two aducanumab trials at a conference in December. One trial showed the drug may slow the progression of the disease, while the other found no effect. Researchers questioned the positive results because not all participants completed the trials.

Kyle Krudys, a clinical analyst at the FDA, told the advisory panel in a recorded presentation that the trial results that showed no effect of the drug on patients shouldn’t detract from the positive trial.

“I have concluded that the applicant has provided substantial evidence of effectiveness to support approval,” Krudys said.

Meanwhile, Tristan Massie, a statistical reviewer at the FDA, determined a third clinical trial followed through to completion is necessary to determine whether aducanumab works.

“Excluding data from a large trial without sufficient justification is unscientific, statistically inappropriate and misleading,” Massie said in a prepared presentation for the advisers.

Billy Dunn, the director of FDA’s Office of Neuroscience in the Office of New Drugs, summed up the agency’s view on the drug in a positive light without a nod to Massie’s concerns. He focused on Alzheimer’s ranking as the sixth leading cause of death among Americans, according to the Centers for Disease Control and Prevention.

“We are highly sensitive to the need for new drugs for Alzheimer’s disease,” Dunn said.

Indianapolis-based Eli Lilly & Co. has several experimental Alzheimer’s drugs in development and shares of the company fell as much as 4.4% after the panel vote. Like Biogen’s drug, Lilly’s donanemab aims clear amyloid plaque from the brain.

“It just feels like the audio and video on the TV are out of sync,” Alexander said.

If aducanumab is cleared, sales are expected to total about $4.7 billion in 2025, according to data compiled by Bloomberg. Biogen developed the therapy with the Japanese drugmaker Eisai Co.

About 5.8 million Americans are living with Alzheimer’s dementia, according to the Alzheimer’s Association. Other approved drugs temporarily improve some symptoms, but none slow or stop the destruction of brain neurons that causes symptoms and eventually kills, the association said in a report last year.

(Updates to include stock-trading halt in third paragraph)