Biogen Inc. shares sank to their lowest in more than a month after two major hospital systems and a group of health insurers said they wouldn’t administer its controversial Alzheimer’s disease medicine.

The biotechnology company’s stock fell 6.8 per cent to US$328.16 Thursday, the lowest since June 4, after the Cleveland Clinic, Mount Sinai Health System in New York City, and some Blue Cross Blue Shield plans snubbed the use of Aduhelm. The U.S. Food and Drug Administration approved the drug on June 7, even after an advisory panel recommended against it. The decline today was its steepest since Nov. 9.

If other medical institutions follow suit, it puts at risk the drug’s implied peak sales of US$9 billion a year, said Salim Syed, an analyst with Mizuho Securities USA. “The point hasn’t been fully digested by the Street on what it could mean,” he wrote in a note to clients.

The Cleveland Clinic won’t carry Aduhelm, known generically as aducanumab, on its formulary after a panel of experts reviewed trial results for the medicine. “Based on the current data regarding its safety and efficacy, we have decided not to carry aducanumab at this time,” the medical center said in an emailed statement, though it may reconsider as additional data become available.

Individual doctors may still prescribe the infusion, though patients won’t get it at the medical center’s clinics. 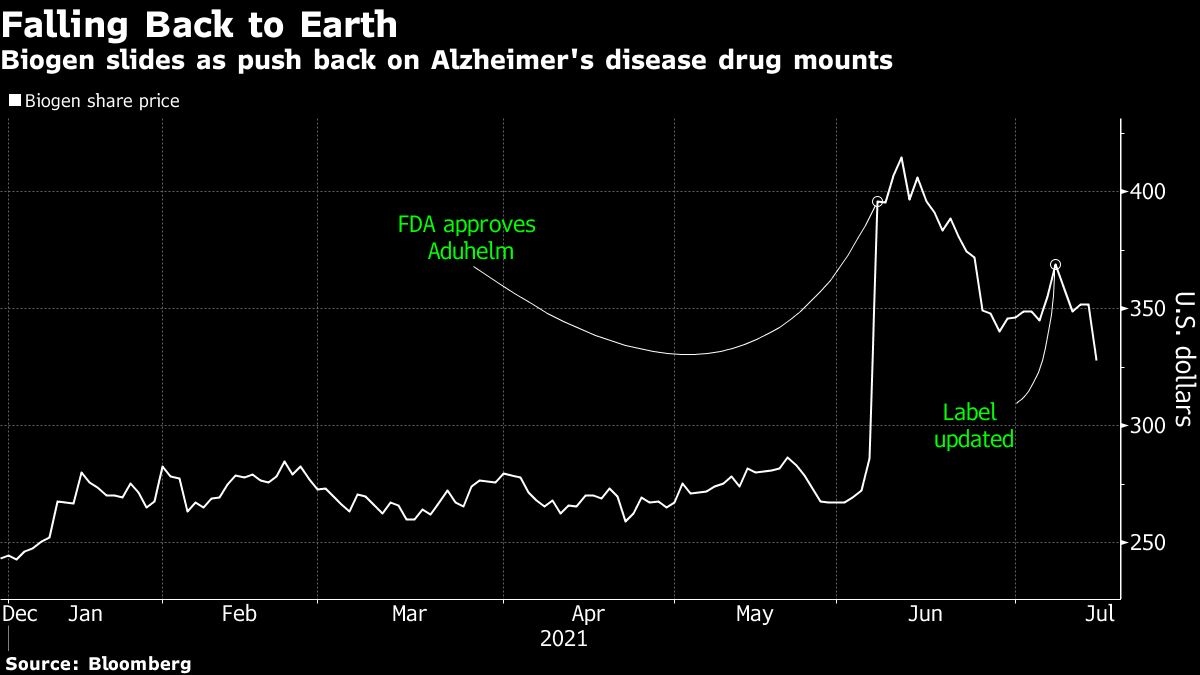 Mount Sinai also won’t be administering the US$56,000-a-year drug until an ongoing government investigation is completed into whether any interactions between Biogen and FDA staff prior to the clearance were inconsistent with the agency’s policies and procedures.

“The FDA’s approval of Aduhelm has raised serious concerns and questions by clinicians, patients, and caregivers and a cautious approach is required,” according to a statement from the hospital network.

Mount Sinai and Cleveland Clinic’s plans to steer clear of Aduhelm were first reported by The New York Times on Wednesday and follow reports earlier this week that some Blue Cross and Blue Shield plans also won’t support Aduhelm use.

The nation’s largest health insurer, UnitedHealth Group Inc. is still working on its coverage policies, executives said in an earnings call on Thursday.

Investors have yet to hear how Medicare will cover Aduhelm amid concern its cost could bankrupt the system. Around 85 per cent of people suffering from the brain-wasting disease are covered under the U.S. federal program, by some estimates. Proposed coverage plans are expected early next year with a final decision thereafter.

Biogen has tumbled about 20 per cent from its early June high. “Medical decisions should be based on science and data, so it is disappointing that patients living with Alzheimer’s Disease may reportedly not be able to access Aduhelm at some facilities,” the Cambridge, Massachusetts-based company said in a statement.

--With assistance from John Tozzi.