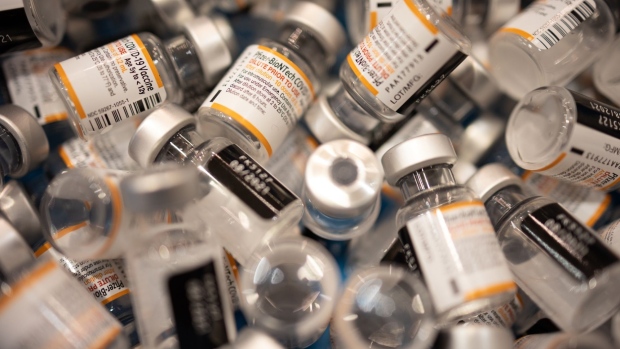 Empty Pfizer-BioNTech Covid-19 vaccine vials at a high school vaccination site in Lansdale, Pennsylvania, U.S., on Sunday, Nov. 7, 2021. Younger children, ages 5 to 11-year-old, across the U.S. are now eligible to receive Pfizer Inc.'s Covid-19 vaccine, after the head of the Centers for Disease Control and Prevention granted the final clearance needed for shots to begin. Photographer: Hannah Beier/Bloomberg , Bloomberg

(Bloomberg) -- Covid-19 vaccine maker BioNTech SE’s success is having a ripple effect for younger companies, drawing interest from investors who might previously have been skeptical about the biotechnology sector in Europe, one of the German company’s early backers said.

“I expect more money flowing into the European, particularly German, biotechnology industry through this new excitement,” said Matthias Kromayer, a partner at Munich-based MIG Verwaltungs AG. MIG, a venture capital investor, was among the founding backers of BioNTech, providing 13.1 million euros ($15.2 million). It has returned 600 million euros on that investment in the biggest payout to investors in the firm’s history.

BioNTech and partner Pfizer Inc. may reap $29 billion in sales next year for their Covid shot, the U.S. company said last week. The vaccine will most likely be this year’s best-selling drug. The race to bring it to the market has helped companies understand ways to speed up drug development, Kromayer said.

Still, it may take at least a decade for enough critical mass to build for European biotechs to choose their home turf for public offerings instead of the U.S. market, Kromayer said. One factor that could speed up the process would be if the German government were to switch to a capital-based pension system, he said, which could create professional pension funds with more money available for IPO and follow-on offerings.

Negotiators seeking to hammer out a plan for Germany’s next government are working on details for a first step in that direction. The potential ruling coalition of Social Democrats, Greens and market-oriented Free Democrats is working on a plan for the $400 billion pension system to start investing some of its reserves in stocks and bonds, according to the political roadmap agreed last month by the three parties.

MIG sold its remaining stake in BioNTech in April. BioNTech’s shares have nearly tripled this year, despite a drop from their August peak as potential Covid antiviral pills delivered positive results in patient trials.