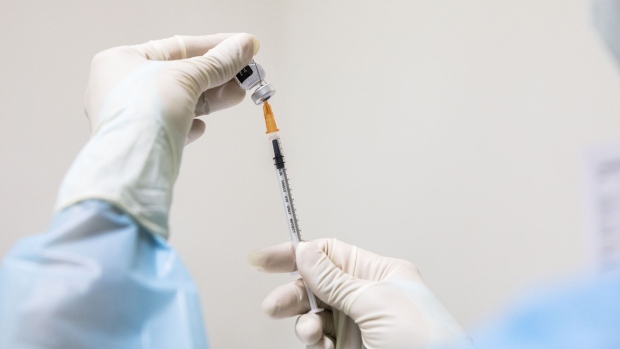 A healthcare worker prepares a dose of the Pfizer-BioNTech Covid-19 vaccine at the Queen Sirikit National Institute of Child Health in Bangkok. Photographer: Andre Malerba/Bloomberg , Bloomberg

(Bloomberg) -- BioNTech SE, the German company that developed a Covid-19 shot with Pfizer Inc., plans to send vaccine production units in shipping containers to Africa and other regions left behind during the pandemic.

The initial facility is expected to arrive in Africa in the second half of this year, with manufacturing starting about 12 months after delivery, the company said Wednesday. Each one would be able to produce as much as 50 million doses a year of its Covid messenger RNA vaccine, for example, and could produce shots against other diseases as well.

The plan is part of an effort to widen access to vaccines that have remained out of reach to large parts of the world over the past year. African health officials are trying to reduce the continent’s reliance on the rest of the world for vaccine supplies. Africa imports about 99% of all the shots it needs. The goal is to slash that to 40% over the next two decades.

While BioNTech, Moderna Inc. and other companies are pursuing their own vaccine projects in Africa, health advocates have urged them instead to support a World Health Organization mRNA initiative that’s already underway in South Africa. Earlier this month, South African scientists reproduced small quantities of a vaccine matching Moderna’s shot, but said they needed further support from the industry to get the shots into commercial production.

WHO Director-General Tedros Adhanom Ghebreyesus said in a statement that BioNTech’s project could complement the mRNA hub and its surrounding network, and Rwandan President Paul Kagame said the technology “opens up a new horizon for global vaccine equity.”

BioNTech estimates that a modular facility would cost less than the 150 million euros ($170 million) required to build a new plant producing at the same scale. The company doesn’t intend to profit from rolling out the “BioNTainer” project in Africa, but is working on “different use cases,” the company said.

Each facility will have at least two modules with six containers each, according to BioNTech. The company said it plans to ship BioNTainers to Rwanda, Senegal and potentially South Africa, and will initially run the facilities before transferring the know-how and operations to local partners.

The leaders of Ghana, Rwanda, Senegal, the WHO, Africa CDC and others met in Germany to discuss the infrastructure, regulatory and technical requirements to set up the manufacturing network, according to BioNTech.

Working with Rwanda and Senegal, the German company said in October that it planned to start construction on its first start-to-finish vaccine plant in Africa in the middle of 2022, with the goal of building a manufacturing network that would eventually supply hundreds of millions of doses to the continent.