Unloved biotech stocks posted the best week since November, fueled by a controversial regulatory decision and a legion of Reddit fans, burning a bunch of short sellers along the way. Now investors are taking a second look at the sector.

With biotech having trailed the broader market for the past three months and chock full of companies that have been the focus of short sellers, it was catnip for the Reddit crowd. Indeed, the price action wrought havoc across the health-care sector after shorts lost over US$465 million on Clover Health Investments Corp. in a single day as the stock nearly doubled.

The moves weren’t just about amateur traders or punishing the shorts. Specialists who live and breathe biotech received two of three critical updates that have been hailed as the impetus for a broad return of investor interest. That includes approval from the Food and Drug Administration of an Alzheimer’s disease drug from Biogen Inc.

“One of the clouds overhanging the sector went away this week, it’s a very good sign,” Brad Loncar, chief executive officer of Loncar Investments, said of the FDA decision. 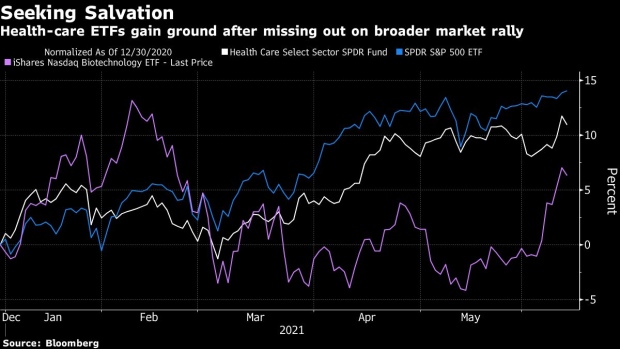 Monday’s decision by the FDA to approve Aduhelm, the first new medicine for the disease in decades, came despite mixed clinical trials, stunning analysts and buoying the sector. More than 15 million shares in the US$11 billion iShares Nasdaq Biotechnology ETF (IBB) changed hands, the highest daily level since June 2017. The index ended the week up 6 per cent.

It wasn’t all good news for these drugmakers. Aduhelm’s US$56,000 a year price tag and a setback for Vertex Pharmaceuticals Inc. tempered the rally. The cost of the Biogen drug renewed concern about a regulatory clampdown on pricing, while Vertex announced that it had halted development of a liver disease treatment that the company said was unlikely to have a clinical benefit for patients. Shares of the drug developer plunged 11 per cent on Friday and it’s the worst performer among large-cap biotechs, falling 18 per cent so far this year.

There’s one more key readout biotech investors are waiting on: results from a trial in major depression from Biogen and its partner Sage Therapeutics Inc. With a win for Biogen and a loss for Vertex, the Biogen-Sage results could very well determine which direction biotech goes next, according to RBC analyst Brian Abrahams. The data are expected by the end of June.

A recent Goldman Sachs survey of 75 investors at the bank’s health-care conference highlights the ongoing uncertainty, with 47 per cent saying the sector would outperform over the second half of the year while the rest were evenly split between expecting health stocks to underperform or move in-line with the broader market.

Vertex’s recent failure also came with a silver lining: the potential for a deal to bolster its pipeline. “Management has signaled a new openness to later-stage deals, and the shelving of VX-864 may now force its hand,” Bloomberg Intelligence analyst Marc Engelsgjerd wrote in a note.

The pace of deals in the first half can determine the direction of biotechs for the rest of 2021, with years that start off with five or more deals over US$500 million usually driving the outperformance of nearly 4 per cent for the Nasdaq Biotech index, according to JPMorgan’s analysis.

Retail traders have also been driving triple-digit and even quadruple-digit gains in obscure biotech names like Ocugen Inc., a drug developer with plans to bring a COVID-19 vaccine to the U.S., and Cassava Sciences Inc., a 20-year old biotech whose main product isn’t yet in the final stages of testing.

Loncar at least is unfazed by biotechs joining the meme parade. “Professionals understand what the true intrinsic value of a biotech is,” he said in an interview. “Unlike GameStop or AMC, a biotech either has good science or it doesn’t.”