The approval of Biogen Inc.’s new Alzheimer’s disease treatment spurred broad gains in the sector, driving the Nasdaq Biotech Index to surge by the most in seven months.

Shares of Eli Lilly & Co. jumped 10 per cent and closed at a record high, while Biogen’s partner in Japan, Eisai Co., surged 56 per cent in U.S. trading, the biggest gain ever for the stock. Small-cap companies working on treatments for the disease also climbed: Cassava Sciences Inc. rose 5.4 per cent, while Annovis Bio Inc. gained 7.4 per cent.

The Nasdaq Biotech Index rallied 3.6 per cent in New York, the biggest jump since Nov. 4, as Biogen rallied 38 per cent to US$395.85, the highest since April 2015. Before the approval, the most bullish analyst estimates had put trading at around US$450 a share.

Traders viewed the approval as a precedent-setting event which could signal the Food and Drug Administration’s stance on other new medicines, and particularly those tied to the brain-wasting disease. “We believe there has been an important shift at FDA, where the agency has begun to create a more supportive, cooperative, and constructive regulatory environment,” Goldman Sachs analyst Graig Suvannavejh said.

Analysts at JPMorgan were more cautious on extending the optimism to other areas of medicine. “We think it’s difficult to extrapolate too much to other areas outside of Alzheimer’s. Of course, the sector will broadly respond well to this,” Cory Kasimov, an analyst with JPMorgan said.

“Hopefully this run of recent favorable FDA decisions can inject some sustained momentum into the group, but the saga of adu has felt like an independent one for quite some time,” Kasimov wrote in a note to clients, referring to Biogen’s drug which will be commercially available as Aduhelm.

Lilly, which is working on its own Alzheimer’s medicine, donanemab, traded as high as US$233.33 on Monday.

The approval “suggests Eli Lilly may be able to revisit its decision on the filing of donanemab, given its strong effects on brain amyloid levels,” Bloomberg Intelligence analyst Sam Fazeli wrote in a note. It could also bode well for Roche’s gantenerumab, he said.

Roche advanced 3.5 per cent in U.S. trading to the highest since Sept. 22. 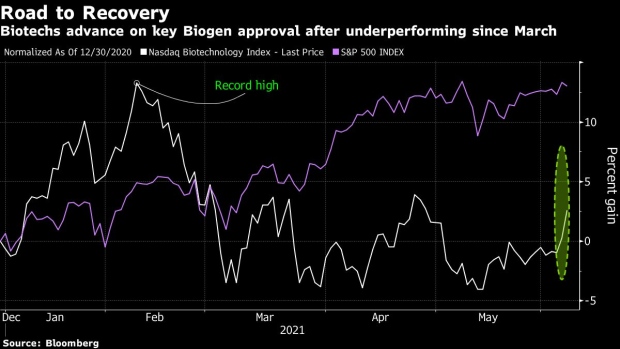 The label for Biogen’s medicine was even broader than most on the Street were expecting, though some were still negative on the trial results that led to the approval. “Unmet need wins over science as the FDA finds a way to approve the drug,” Citi analyst Mohit Bansal wrote in a note to clients.

The decision on Aduhelm is one of three big catalysts for the sector that analysts have been saying could turn around flagging sentiment. Investors will now be awaiting results from a Vertex Pharmaceuticals Inc. study as well as another Biogen update. Next up for Biogen will be the release of data on a drug for depression developed with partner Sage Therapeutics Inc.