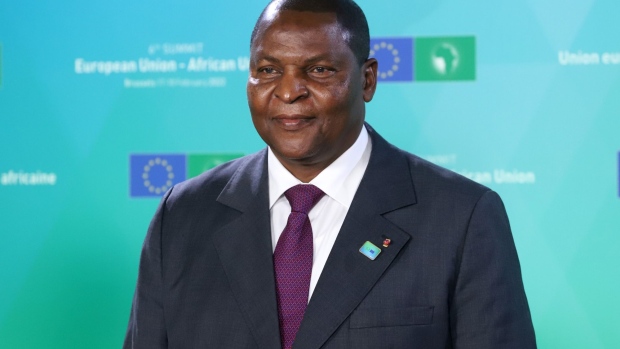 Faustin-Archange Touadera, Central African Republic's president, at the European Union-Africa Union Summit at the EU Council headquarters in Brussels, Belgium, on Thursday, Feb. 17, 2022. Brussels welcomes about 40 African leaders for the first time in eight years, aiming to reset European relations with the continent as it vies with China for influence. , Bloomberg

(Bloomberg) -- The World Bank is concerned about a plan by the Central African Republic to set up a crypto hub after it became the world’s second country to adopt Bitcoin, citing lack of transparency and the effect the move may have on financial inclusion.

The African nation, which relies on donors for more than half of its budget, in April enacted a law making Bitcoin legal tender in the country. It now plans a “Crypto Economic Zone,” according to a post on President Faustin-Archange Touadera’s verified Twitter handle. The post included a presentation of the plan, which mentioned a $35 million grant pledged by the World Bank to digitize the nation’s public sector.

The adoption of Bitcoin in the nation -- with an internet penetration of about 11% -- has been clouded in mystery. Its introduction was abrupt and non-consultative. The Bank of Central African States, which sets monetary policy for six countries in the region, said it wasn’t aware and pushed back against the plan.

“It is important that the relevant regional institutions, such as the central bank and the banking authorities, are fully consulted and remain in the driver’s seat,” the World Bank said in an emailed response. “It will be physically impossible,” for the World Bank to fund the crypto project, it said.

The $35 million funding that the World Bank approved May 5 is meant for improving CAR’s existing public financial management system through digitization of processes such as payments of salaries and tax collections -- not the crypto project dubbed Sango, the lender said.

“The World Bank is not supporting “Sango – The First Crypto Initiative Project”,” the lender said. The digital governance loan “is unrelated to any crypto-currency initiative.”

Bitcoin’s volatility -- it’s down 30% this year -- may also be bad news for CAR, which the World Bank says is “one of the poorest and most fragile countries in the world.” The nation, rich in gold and diamond reserves, has been plagued by years of violence.

A CAR presidency spokesman declined to comment on the program when contacted by phone on Wednesday.

CAR is among central African countries including Cameroon, Chad, Equatorial Guinea, Gabon and the Republic of Congo that use one of two versions of the CFA franc. The region’s monetary rules require consultation on change in currency policies.

The crypto project could “reshape CAR’s financial system,” according to President Touadera’s Tweet on Tuesday.

With an economy worth about $2.3 billion, CAR is seeking ways to develop its resources. The government expects its plan to help crowd-fund infrastructure projects. It will also create a digital national bank, according to the presentation.

“We have concerns regarding transparency as well as the potential implications for financial inclusion, the financial sector and public finance at large, in addition to environmental shortcomings,” the World Bank said.