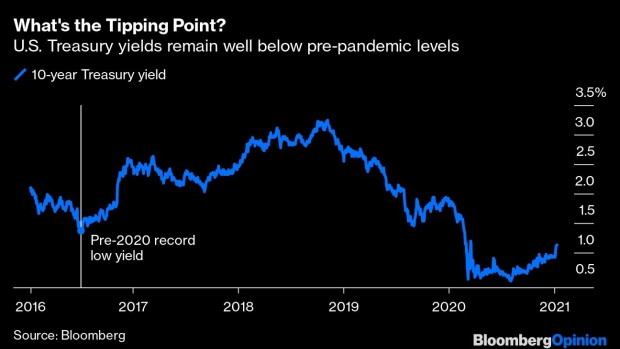 Consider Tesla Inc., for instance. From my Bloomberg Opinion colleague John Authers: “The risks far outweigh the potential rewards. The more we see of such crazy behavior, the more we should prepare to take evasive action against a true investment bubble.” Or cryptocurrencies, from Scott Minerd, chief investment officer with Guggenheim Investments: “Bitcoin’s parabolic rise is unsustainable in the near term.” More broadly, Bank of America Corp.’s checklist of signals that historically indicate an impending bear market correction in risk assets is starting to fill up.

Now, the central bank hasn’t said directly that it’s worried about the surging price of Tesla shares and Bitcoin, and it likely never will. But the undertone from last week’s round of speakers could be interpreted as an early sign that the the Fed’s third mandate beyond maximum employment and stable prices — financial stability — is starting to weigh on some policy makers heading into 2021 as the stock market gets compared to a lucky slot machine.

It’s one of the only explanations I can come up with for why Fed officials would bring up reducing their asset purchases — and possibly sooner than investors were expecting — when the U.S. labor market lost 140,000 jobs in December and the central bank’s preferred measure of inflation is around 1.4%. While I doubt any sort of tapering will happen this year, and this is largely just getting traders comfortable with that word, it’s possible that policy makers are now considering what sort of risks might be emerging from expectations that U.S. Treasury yields will be near record lows indefinitely.

The most impressive element of last week’s rally in stocks was probably that it happened in the face of benchmark 10-year Treasury yields rising by more than 20 basis points, to 1.12%. The S&P 500 Index wobbled on Monday as yields climbed past 1.13% but remained relatively resilient considering the sharp drop in Bitcoin and Tesla. While it’s foolish to predict an exact level at which financial markets would find equilibrium, a simple chart of the past five years would suggest a move in 10-year yields to the pre-2020 record low of 1.32% would serve as an interesting test of stock-market strength. That’s not far off from the S&P 500’s dividend yield at this point.

The typical thinking among bond traders just a short time ago was that the Fed would step in to halt a sustained move higher in yields. As recently as a month ago, many expected the central bank to alter its asset purchases and buy more longer-dated Treasuries. Not only does that seem to be off the table, but, as minutes of the December meeting showed last week, there’s a serious effort to think about how best to scale back asset purchases.

“It could cause disruption in the markets if we try to do it too soon,” he said. “So, I have many degrees of caution on this, to just be steady as she goes until we start to really see the economy healing.”

“In our statement, we said we wanted to make significant progress towards the goal. I don’t think we necessarily have to get to the goal,” Bostic said in a televised interview with Fox Business recorded Wednesday and broadcast Thursday. “I’m definitely open to the possibility that we may pull it back sooner than people expect.”

While the pandemic will likely be a drag on the economy “for a good part of 2021,” once the recovery is established and a large part of the population is vaccinated, Fed officials should start to consider “when we can start tapering,” Kaplan said. “There will be a point at which it’ll be much healthier for the economy and for the markets to be weaning off some of these extraordinary measures,” he added.

“It could be the case that things are going a lot better, and we do end up doing some type of tapering” in late 2021 or early 2022, he tells reporters on a conference call.

That is a lot of taper talk all of a sudden. Perhaps it’s because Democrats swept the Georgia elections, raising the likelihood that more fiscal aid will turbocharge the economy faster than if Congress were divided. Either way, both because of government stimulus and the prospect of the Fed paring back asset purchases, Bank of America’s Mark Cabana has warned of “upside risks” to the bank’s year-end forecast for 10-year Treasury yields of 1.5%. JPMorgan Chase & Co. analysts raised their forecast to 1.45% from 1.3%.

Cutting through some of the noise, the most crucial guidance last week came from Fed Vice Chair Richard Clarida, who stated: “My economic outlook is consistent with us keeping the current pace of purchases throughout the remainder of the year.” While he said that could change, “it could be quite some time before we would think about tapering the pace of our purchases.”

It feels as if that horse is already out of the barn. Even if thinking about tapering doesn’t lead to any imminent action, the tilt toward scaling back asset purchases, even modestly, calls into question one of the strongest pillars of the rally in risky assets over the past several months. And while it’s true that previous cases of the Fed winding down its quantitative easing programs have had the counterintuitive impact of lowering Treasury yields, there’s no guarantee that will happen again if fiscal policy is as accommodative as it might be.

The Fed wants to foster a strong labor market and inflation reliably above 2% so that it can eventually operate away from the zero lower bound of interest rates. It remains an open question whether it can make that happen and just how long that will take coming out of a global pandemic.

But on the way to reaching those goals, there’s a level of rampant speculation in asset prices that even the Fed will seek to stymie, whether in Bitcoin or Tesla, the ARK Innovation exchange-traded fund or special-purpose acquisition companies. Central bankers’ taper talk last week might have been the first shot across the bow.