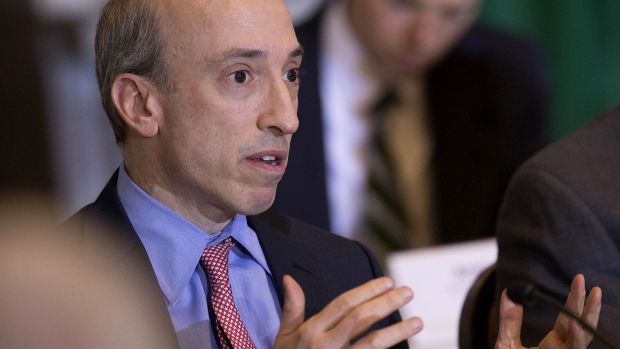 (Bloomberg) -- U.S. Securities and Exchange Commissioner Gary Gensler gave what may be the strongest sign of support yet from the agency for a Bitcoin exchange-traded fund. Crypto fans, though, are not exactly thrilled.

At the center of the issue is what an approved fund would track. Gensler, in his first major speech centered on cryptocurrencies, suggested an openness to an ETF focused exclusively on Bitcoin futures, which require that investors put down a substantial amount of money on margin to trade. That’d be different from a Bitcoin-backed fund, which is what most crypto enthusiasts have been hoping for.

“We see Bitcoin futures-based funds as inferior products that have consistently underperformed the Bitcoin price and bring additional complexities in regards to how they must be managed, at a higher cost than ETFs,” Matthew Sigel, head of digital assets research at VanEck, said by phone. “Simply put, they are substandard vehicles.” His firm has crypto-focused applications in registration.

U.S. regulators have yet to approve a crypto ETF though more than a dozen companies are looking to launch one. Nine have filed for authorization since the end of 2020, according to a tally kept by Bloomberg Intelligence.

Policy makers have in the past voiced concerns over fraud and price manipulation, as well as worries over how a fund would be able to handle Bitcoin’s infamous volatility. As part of his comments, Gensler said that while he’s interested in blockchain -- or the technology underpinning digital assets -- and sees potential value in crypto, he plans to move aggressively to protect investors.

Meanwhile, Canada has approved several Bitcoin ETFs -- the first-ever in the country launched at the start of the year.

“Investors want the real deal and a quick glance north of the border shows the real deal not only exists, but is prospering,” said Nate Geraci, president of the ETF Store.

Most pending ETF applications have been filed under 1930s laws that allow stock exchanges to list products. Bloomberg reported that Gensler is hinting that he’d like to see a filing that seeks approval through a 1940 law that governs mutual funds.

Here’s what market-watchers had to say:

“What the SEC seems to be doing is pushing individual investors into higher-risk, lower-quality products to get their Bitcoin exposure instead of sticking with the tried-and-true ETF wrapper, which has given millions of investors exposure to so many different assets, many of which are much more speculative and illiquid than Bitcoin.”

Geraci of the ETF Store:

“Futures introduce a layer of complexity, as contracts held by an ETF must be managed and rolled. Futures-based ETFs are unlikely to perfectly track the spot price of Bitcoin. Plus, there are differences in taxation,” he said. “That said, I view this as a positive step towards ‘physical’ Bitcoin ETF approval. Bitcoin futures are regulated by the CFTC, which provides the SEC with a level of comfortability they don’t currently have with crypto exchanges. If futures-based Bitcoin ETFs are approved and show their mettle, perhaps the SEC can get more comfortable with entertaining the real deal.”

“I view it all as different stepping stones. The same level of demand won’t be there for a futures product so they won’t grow to be as large or grow as quickly as a physical Bitcoin ETF product will,” he said. But, “the mutual fund makes sense for numerous reasons. One, it’s a 40 act product, which carries more investor protections. Two, a mutual fund can be closed, an ETF can’t. And three, futures are regulated. It provides a bit of an additional layer of investor protection from the underlying Bitcoin market. But in my mind, it doesn’t make much of a difference because if you truly believe Bitcoin is manipulated, Bitcoin futures are going to be affected by said manipulation of the underlying market.”

“Investors have favored physical commodities ETFs over futures-based ones as the latter adds additional complexity,” he said. “However, I continue to think the SEC remains concerned that an ETF cannot be closed to new investors, creating a liquidity risk. While the door is still open for an ETF approval, if it involves Bitcoin futures, near-term approval remains uncertain.”

“Futures are a derivative of Bitcoin and there is no physical Bitcoin backing behind it. It’s a proxy of the performance of Bitcoin. Maybe it’s just a first step. Maybe it will lead to more comfortability in eventually leading toward getting an actual Bitcoin ETF.”