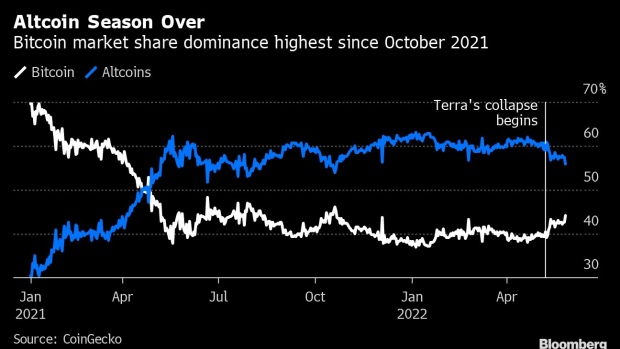 A novelty Bitcoin token arranged in Barcelona, Spain, on Wednesday, March 9, 2022. Bitcoin dropped back below $40,000, erasing almost all the gains sparked by optimism about U.S. President Joe Biden’s executive order to put more focus on the crypto sector. , Bloomberg

(Bloomberg) -- Crypto had another bad week -- and it may only get weirder.

Bitcoin led a decline in digital assets across the whole crypto spectrum, with the world’s largest token set for an eighth straight weekly loss in its longest such slump since August 2011.

Bitcoin fell about 2.2% on Friday to $28,800 as of 1 p.m. in New York, buffeted by both the macro headwinds of Federal Reserve monetary tightening and the crypto-specific fallout from this month’s implosion of the TerraUSD algorithmic stablecoin, which continues to weigh on digital assets -- particularly those related to decentralized finance. Altogether, the crypto market has lost some $500 billion in market value so far in May, a 29% plunge.

For a second day, cryptocurrencies declined even as risks assets such as stocks rose, marking a break from their recent lockstep relationship -- and a sign of shaky conviction that could portend a worrisome trend.

The market’s swoon “took a lot of confidence out of the asset class,” Matt Maley, chief market strategist at Miller Tabak + Co., said by email. “Therefore, as investors become a little more confident about the markets in general, they’re looking at other areas in which to buy on weakness. They don’t want to get burned again in the cryptos.”

Ether, the second-largest cryptocurrency, and other altcoins linked to popular DeFi projects like Avalanche and Solana were among the biggest decliners, down between 4% and 7% on Friday. And in the market for nonfungible tokens, even popular collections like Bored Ape Yacht Club and Cryptopunks are coming under pressure, market data show. Meanwhile, short interest in the first US Bitcoin-futures backed exchange-traded fund is near the highest since the fund’s October 2021 inception, as investors step up bearish bets.

With the reverberations from Terra’s collapse hitting altcoins harder, Bitcoin now claims a larger share of the cryptosphere, accounting for 44% of the total market’s value. That’s the most since October, just before the latest bull market peaked, based on data from CoinGecko. But it’s not as if Bitcoin has been spared: It is now down some 60% from its all-time high in November, though it has generally traded in a range of $28,000 to $30,000 in the past couple of weeks.

The biggest cryptocurrency remains below its 20-, 50- and 200-day moving averages. “With each moving average currently sloping lower, it’s the epitome of a downtrend,” Frank Cappelleri, a trading-desk strategist at Instinet, said.

There is no question that the strong correlation between cryptocurrencies and other risk assets has broken down recently. As tech stocks in the US rally after weeks in the doldrums, digital assets have largely stayed in the sidelines, Fiona Cincotta, senior market analyst at City Index, said by email.

“This is far from the decoupling that the Bitcoin bulls were looking for,” Cincotta said. “I doubt this will be the end of the Bitcoin-Nasdaq positive correlation. However, the concern is Bitcoin may only trace the Nasdaq when it falls.”

A move below $28,000 would be significant to continue the downtrend and test the year’s $25,425 low, Cincotta said. Beyond this, $20,000 is the next psychological level that comes into play. On the flipside, buyers will be looking for a move over $31,500 for a breakout to the upside and for any chance of a recovery in the price, she added.

If anything, the fact that Bitcoin is trading sideways is already a good thing, Miller Tabak’s Maley said.

“The longer it can stabilize, the higher the odds will be that it can regain some upside momentum. Confidence is such an important part of new assets like cryptocurrencies,” he said by email. “Until investors regain more confidence in the cryptos, they will no longer be a good a risk-on/risk-off indicator.”

Investors looking for a respite over the long Memorial Day weekend in the US may be disappointed. Liquidity has been low and could tighten further, while leverage in the Bitcoin market is increasing, Sean Farrell, head of digital-asset strategy at the financial research firm Fundstrat, wrote in a note on Thursday. The macro outlook also remains unfavorable to risk assets as the Fed hikes interest rates and starts quantitative tightening, he said.

“Things could get weird,” Farrell said about the upcoming holiday weekend. The combination of low liquidity, increasing leverage and tightening monetary conditions “could lead to large price swings, and potentially further volatility to the downside in the immediate term.”

Buying put protection on long-crypto positions and cutting exposure to more speculative altcoins are a couple of safeguards, Farrell wrote.