Bitcoin rallied past US$8,000, extending its longest winning streak since 2013 while giving fresh momentum to a cryptocurrency market that crashed only last year.

Just hours after leaping 25 per cent on Monday with no apparent explanation, the largest digital token added as much as 5.9 per cent on Tuesday. That helped push the crypto universe’s total market value to almost US$250 billion -- a level not seen since last August -- as tokens including XRP, Ethereum and Dash all advanced more than 4 per cent.

Speculation over what was behind the early-May surge runs from a possible squeeze on short positions to investor relief that recent hackings and scandals aren’t disrupting the broader market. Many crypto enthusiasts point to a long-standing claim -- that their assets have become a haven during market turbulence.

“There’s been no shortage of explanations for the recent spike, some more ludicrous than others and none that are nearly significant enough to match the size of the leap we’ve seen,” Craig Erlam, senior market analyst at Oanda Corp. in London wrote in a note to investors.

Erlam said the rally, which has spilled over to many of the other 2,000-plus digital coins that trade, harks back to the frenzy that drove Bitcoin almost to US$20,000 in 2017 before it crashed to almost US$3,000 the following year.

“Maybe we’ve seen Bitcoin recapture some the previous FOMO behavior,” he said in emailed remarks to Bloomberg. “People see it rising and jump on for fear of missing out.”

Bitcoin was 3.4 per cent higher as of 10:01 a.m. in New York, paring its advance from as high as US$8,331.38, according to Bloomberg composite pricing. That added to Monday’s gain, which was its biggest one-day increase since 2014. 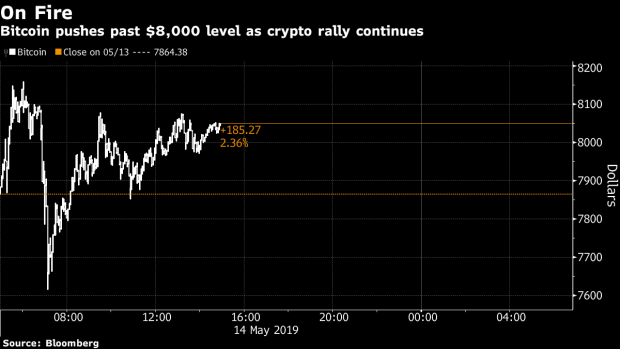 The Bloomberg Galaxy Crypto Index, which tracks a basket of the largest digital assets, added as much as 9.3 per cent before paring the gain to 6.8 per cent.

The crypto rally, like many earlier ones in the decade-old token market, defies simple analysis. Ownership is anonymous, pricing is not always unified through arbitrage, and reporting and regulation are almost non-existent -- though for the past year U.S. futures authorities have disclosed net positions on American platforms.