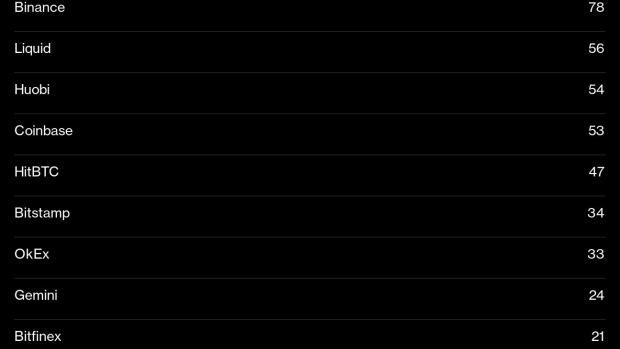 Illuminated mining rigs operate mounted inside racks at the BitRiver Rus LLC cryptocurrency mining farm in Bratsk, Russia, on Friday, Nov. 8, 2019. Bitriver, the largest data center in the former Soviet Union, was opened just a year ago, but has already won clients from all over the world, including the U.S., Japan and China. Most of them mine bitcoins. Photographer: Andrey Rudakov/Bloomberg , Bloomberg

(Bloomberg) -- A handful of Bitcoin exchanges are key to setting prices, allowing traders to largely ignore the myriad of other bourses without the risk of missing major moves, according to a new study.

Only 10 markets -- among them Binance, Liquid, Huobi, Coinbase and HitBTC -- are where most price discovery takes place, and moves that originate there later migrate to other sites, according to Digital Asset Research, which provides crypto prices and data analysis for institutional clients.

“There’s some lesson here that most of the time, most of your attention should be on a smaller group of these exchanges,” Doug Schwenk, chairman of DAR, which provides data to traders, said in a phone interview.

The study should go some way to easing concern among crypto investors about the even-wilder-than-normal price swings seen on the smaller exchanges, many of which have been accused of reporting artificially high trading volumes. The Securities and Exchange Commission has rejected applications from firms seeking to start exchange-traded Bitcoin funds partly because of worries over market manipulation.

“Even though we know there’s fake volume in the market, that fake volume is not materially impacting the price,” Erin Friez, general counsel at DAR, said in a phone interview.

For their study, researchers examined more than 100 instances when Bitcoin’s price moved more than $100 within 5.5 minutes between April 1 and Dec. 31 of last year. They then looked for corresponding moves on other exchanges.

Additionally, they found that futures contracts on exchange BitMex may have an impact on price moves as well, although the exact impact is still being analyzed, the researcher said.

DAR receives no fees from crypto exchanges or Bitwise Asset Management, which recently argued before the SEC that Bitcoin trading isn’t as open to manipulation as the agency fears.

To contact the editors responsible for this story: Nick Turner at nturner7@bloomberg.net, Brendan Walsh, Dave Liedtka