Bitcoin plunged as much as 17 per cent to its lowest level in a month as El Salvador’s crypto rollout got off to a rocky start.

The largest cryptocurrency fell as low as US$43,050 in New York Tuesday, tumbling more than 10 per cent in the course of an hour, before recouping about half the losses. The Bloomberg Galaxy Crypto Index, which tracks some of the largest digital tokens, lost as much as 19 per cent at one point.

“Mystery selloffs, or selloffs where a legitimate reason is only found a significant while later are much more common in crypto than in other asset classes,” said Stephane Ouellette, chief executive and co-founder of FRNT Financial. “The market remains far more opaque and global than most if not all other notable asset classes.”

The swiftness of the plunge was likely accelerated as more than 336,000 traders had their accounts liquidated over the past 24 hours, equal to around US$3.6 billion worth of crypto, according to data from Bybt, a crypto futures trading and information platform.

The retreat comes as Bitcoin faces one of its biggest test in its 12-year history as El Salvador became the first country to adopt it as legal tender. The Central American nation’s president, Nayib Bukele, said on Twitter that the digital wallet being used in the project can now be downloaded after it was shut down earlier because of technical glitches.

The wallet, known as Chivo, comes pre-loaded with US$30 worth of the currency for users who register with a Salvadoran national ID number. 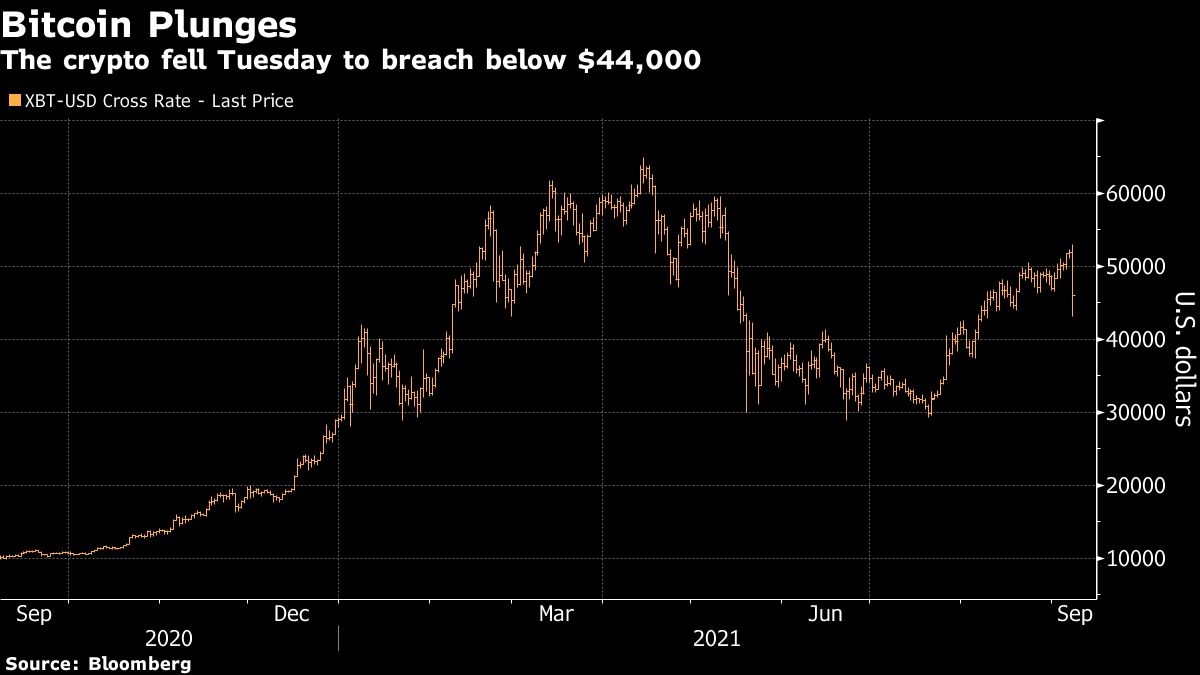 Users on platforms including Twitter and Reddit had discussed plans to buy US$30 worth of Bitcoin en masse on Tuesday to mark El Salvador’s law coming into effect. The potential coordinated price pump echoes previous online campaigns targeting meme stocks like GameStop Corp.

Bukele also said during the price slide that he was buying the dip, commenting on Twitter that 150 new coins were added and that the country now holds 550 Bitcoin. “Cryptocurrency” and “cryptocurrencis” were trending on Twitter at one point.

Tuesday’s selloff is the biggest break in the rebound that had lifted Bitcoin almost 75 per cent since late July. Other coins that had enjoyed even bigger price rallies were faring worse: Cardano lost about 15 per cent Tuesday, while Dogecoin, the often-derided joke cryptocurrency, dropped 18 per cent, according to CoinMarketCap.com.

Traders also flagged the poor seasonality as cause of concern. In the past decade, September is the only month when Bitcoin has failed to deliver positive returns. The token fell during the calendar month in six of the previous 10 years, losing more than 6 per cent on average, data compiled by Bloomberg show.

“It’s a bit of the speculative excesses being wrung out of the system,” Bloomberg Intelligence’s Mike McGlone said on Bloomberg’s “QuickTake Stock” streaming program.

Ether, the second-largest digital asset, also posted a drop, going from US$3,900 to roughly US$3,000 in a matter of minutes before paring its loss to about 13 per cent.

Shares of companies linked to cryptocurrencies also tumbled. Riot Blockchain Inc. slumped 5.9 per cent, while Marathon Digital sank 8.4 per cent. Coinbase Global Inc., the provider of an online trading platform for such digital currencies fell 3.3 per cent and MicroStrategy Inc. declined 8.2 per cent.

Still, Bitcoin found support and bounced off its average price over the last 50 days. It recouped some of its losses to trade above its 200-day moving average, which is around US$46,000.

“We’ve often seen in the past where many traders take profits at psychological levels including US$40,000 and US$50,000,” said Valkyrie Investments CEO Leah Wald. “The market tends to sell off as a result of limit orders placed just above these key price levels, or as a result of stop losses placed after surpassing them because people want to lock in profits should the market retrace.”

Many analysts were stumped by Bitcoin’s moves -- the coin is notorious for its volatility but the speed with which it plunged and recouped some of the losses took many by surprise. As of 4:089 p.m. in New York, it traded around US$46,781, an 9.9 per cent drop.

“It didn’t surprise me that Bitcoin didn’t rally on the El Salvador news, but this pullback is weird, especially since it came mid-morning and not shortly after the news broke,” said Matt Maley, chief market strategist for Miller Tabak + Co. “If it was a ‘fat finger’ at a hedge fund or brokerage firm, it won’t be a problem. If it is something else, I’ll become a lot more worried.”