Like Monty Python’s Black Knight, Bitcoin believers treat near-fatal volatility as mere flesh wounds. Drops of 80 per cent are welcomed as fortuitous buying opportunities. But far from being a weakness, this is evidence of the asset class’ longevity. The cryptocurrency rallied 224 per cent this year, bringing to mind the wild advances of 2017 as it soared to record highs.

While the supply side of the schedule is algorithmically defined, I was caught off guard by the ability of the demand side to withstand volatility. I went into more detail in how my thinking on this asset class evolved in this YouTube podcast:

Supply of the digital tokens are capped at a maximum of 21 million which it is expected to reach in 2140, with periodic reductions in the reward for the network of computers that certify transactions. Yet supply dynamics aren’t sufficient to guarantee a long-term future. Many assets have artificially limited supply: Baseball cards, limited print-run art work, and a number of historic Ponzi schemes fall into this category.

What distinguishes the successes is how investors respond to crashes. In most cases, when a vehicle designed purely around the greater-fool theory collapses, it never recovers. There has been no substantial progress made on Bitcoin as a unit of exchange. It’s far from widespread adoption as a currency. 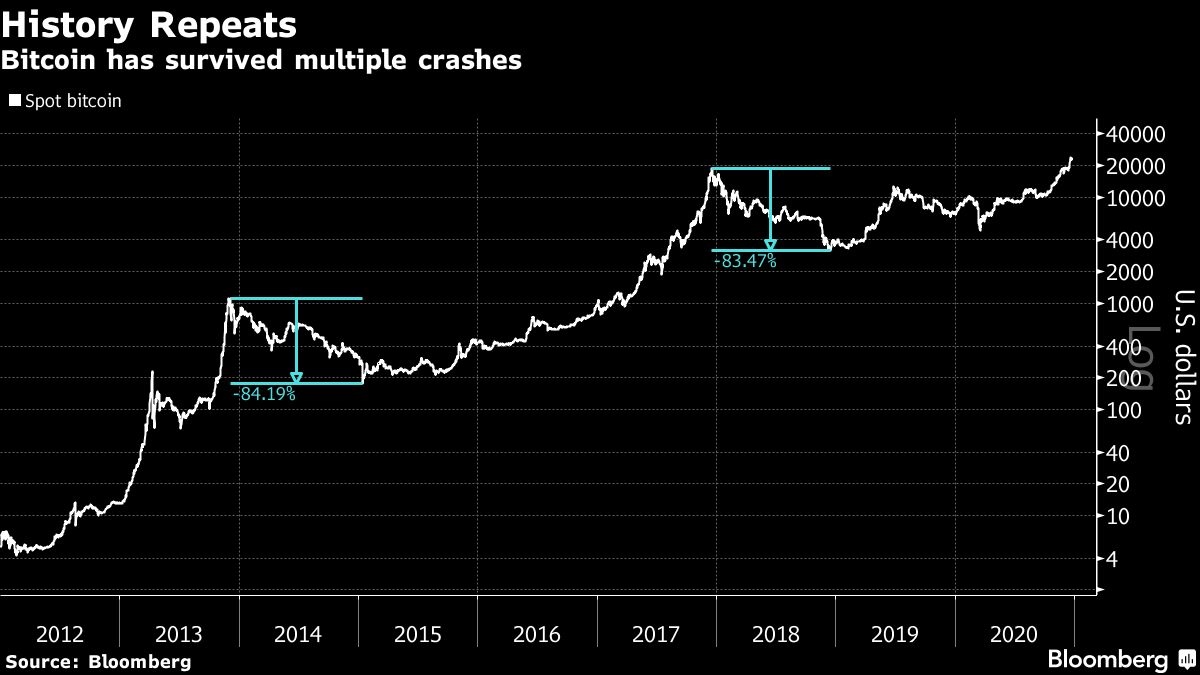 Since Bitcoin’s market capitalization reached US$1 billion in March 2013, there have been two cycles of spikes to record highs, followed by drawdowns of more than 80 per cent. Each of those cycles were preceded by a halving of the block reward.The first cycle could be dismissed as an anomaly, the second as a coincidence. But a halving again occurred in May, and the cycle is repeating before our eyes with the cryptocurrency coming within a whisker of the all-time peak last week. To ignore it now is to dismiss the evidence of history.

Like social networks, cryptocurrencies derive their value from the number of users. I could build a platform with the exact qualities of, and even some improvements over, Facebook, but achieving critical mass is another matter.

The cryptocurrency remains a speculative asset and more needs to happen to secure its claim to preserve wealth over time. Volatility would have to decline, and a reliable link to inflation would have to emerge. But to bet against Bitcoin recovering from the next crash is to bet against experience. And its sheer, bloody-minded survival is what gives it the best chance at eventually becoming the ultimate store of value.

Eddie van der Walt writes for the Bloomberg Markets Live blog. The observations he makes are his own and not intended as investment advice. For more markets commentary, see the MLIV blog.