Bitcoin traded near the lowest levels since September after an earlier swoon extended its weeks-long decline from an all-time high to about 40 per cent.

The largest cryptocurrency by market value fell as much as 4.9 per cent to US$41,008 before stemming the decline during U.S. trading hours. It hit a record of almost US$69,000 on Nov. 10. Ether, the second-largest, dropped as much as 9 per cent to its lowest level since Sept. 30. Both of those tokens, as well as others including Binance Coin, Solana, Cardano and XRP are down more than 10 per cent in the past seven days, according to CoinGecko.

The retreat comes after minutes from the Federal Reserve’s December meeting, published Wednesday, flagged the chance of earlier- and faster-than-expected rate hikes as well as potential balance-sheet rundown. 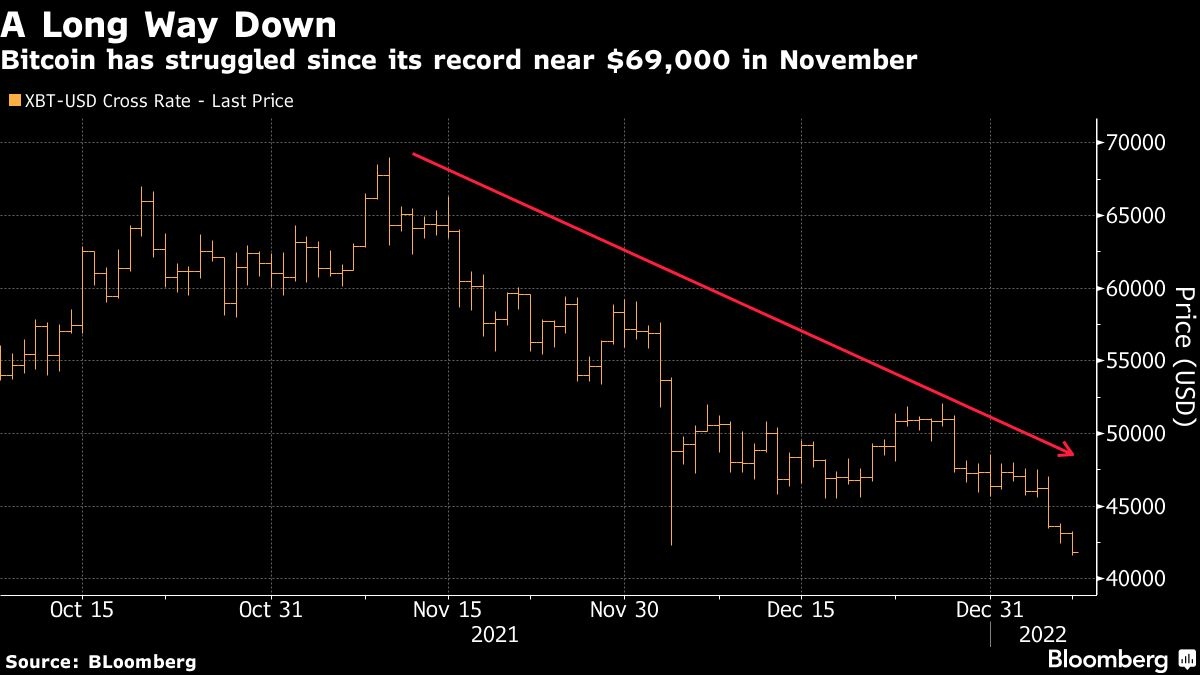 “The Fed’s intention to reduce the balance sheet in Q1 2022 is the primary cause of this sell-off,” Fundstrat strategists said in a note Thursday. “Unfortunately, no immediate support looks likely ahead of September 2021 lows at US$39,573, with breaks of that leading down to last summer’s May-July bottom.”

Risk assets including U.S. stocks fluctuated Friday in choppy trading while Treasuries fell as investors assessed hiring data showing a spike in wages paid that could force the Fed to accelerate its timeline for rate hikes.

Bitcoin gained about 60 per cent last year, outperforming other asset classes amid a narrative that included institutional adoption, inflation protection and investment diversification. It’s struggled in recent weeks, though, amid a volatile period for financial markets. Spiking inflation is leading central banks to tighten monetary policy, threatening to reduce the liquidity tailwind that lifted a wide range of assets.

“As the crypto market matures, we can see major crypto assets such as Bitcoin and Ethereum increasingly move in tandem with traditional markets including Treasury bonds,” said Ben Caselin, head of research and strategy at crypto exchange AAX.

Also factoring into the declines, according to Todd Morakis, co-founder of digital-finance product and service provider JST Capital: the unrest in Kazakhstan, where a substantial number of crypto-mining operations had gone after China’s crackdown on the practice, and which were already affected by the country’s recent power-supply troubles.

The Bitcoin hash rate, a measure of the network’s computing power, dropped to 176 million terahashes on Thursday from a record of about 208 million on Jan. 1, according to data from Blockchain.com.

Still, there were signs of a potential recovery: Hayden Hughes, chief executive officer of Alpha Impact, a social-trading platform, said his client base was “accumulating heavily” in the Asia morning, though with a strong preference for Ether as opposed to Bitcoin. And Jeffrey Halley, senior market strategist at Oanda Asia-Pacific, noted that the relative strength index or RSI is “well oversold” and he wouldn’t be surprised to see a bounce back to US$45,000.

But into the weekend, when liquidity can often be thin and exacerbate price movements, there’s a risk both up and down.

A break of Bitcoin’s price below US$41,000 “could get ugly, with the mid-to-low thirties a possible destination,” said Antoni Trenchev, co-founder of crypto lender Nexo. He added that Bitcoin endured a two-month period of consolidation in the US$30,000 to US$40,000 range from May to July last year, and “a repeat of history can’t be ruled out as Fed tightening remains the popular narrative.”