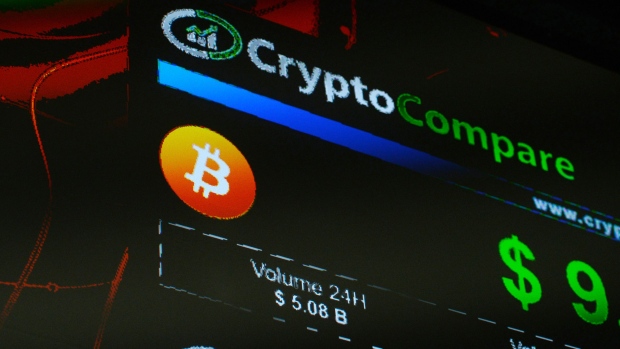 The symbols of Bitcoin and Ethereum cryptocurrencies sit displayed on a screen during the Crypto Investor Show in London, U.K., on Saturday, March 10, 2018. The meeting is the largest crypto and blockchain event for investors in the U.K. , Photographer: Bloomberg/Bloomberg

Bitcoin slid below US$10,000 just three weeks after surging above it for the first time in more than a year as U.S. legislators expressed deep skepticism about the viability of cryptocurrencies.

Cryptocurrencies came under fire during a U.S. Senate Banking Committee hearing about Facebook’s plan to create its own digital token, known as Libra. Lawmakers compared the social media giant to a toddler playing with matches who burns the house down, blasted it for repeatedly violating consumers’ privacy and accused the company of cheapening social discourse and polarizing America.

The criticisms underscored how uncomfortable financial regulators remain with the idea of digital coins coexisting with fiat currencies. While Facebook’s initial disclosure of libra was credited with contributing to Bitcoin’s recent rally, the social-media giant’s plans have rekindled debate on how crypto should be regulated.

Bitcoin is still over twice the price where it started the year, having hovered around or below the US$4,000 level from January through March. It caught a bid in April and went parabolic, nearly reaching US$14,000 by late June. Since then, it has struggled to maintain that momentum. It briefly fell below US$10,000 on Monday, but Tuesday’s move below the round number has lasted longer.