Cryptocurrencies fell on Tuesday, with Bitcoin briefly dipping below US$60,000 and Ether touching its lowest level this month, in a broad-based retreat from recent record highs.

The largest digital token whipsawed traders, dipping as much as 8.2 per cent before cutting the decline by around half. The slide to US$58,661 was the biggest intraday drop since Sept. 24. Second-ranked Ether tumbled more than 10 per cent before also paring losses. Global crypto market cap has dropped some 10 per cent in the past 24 hours to US$2.7 trillion, according tracker CoinGecko.

“After several days of gains, which saw Bitcoin hover near its all-time high as many other altcoins managed to reach new highs, we are seeing a significant pullback,” said Walid Koudmani, an analyst at XTB Market. “The extreme volatility that the market is prone to could lead to a potential domino effect if more negative news were to emerge and take prices to new lows.”

Technical indicators had suggested the strong run of late across the notoriously volatile market was due for a pause.

Some analysts also attributed the dip to new tax-reporting requirements for digital currencies that are part of the US$550 billion infrastructure bill, which President Joe Biden signed into law Monday.

“We’ve seen the U.S. infrastructure bill get signed, which has initiated a selloff from traders who are concerned about regulation and taxation,” said Hayden Hughes, chief executive officer of Alpha Impact, a social-trading platform.

The law imposes new reporting requirements on cryptocurrency “brokers,” like Coinbase, that regularly provide services carrying out transfers of digital assets. Under the new requirements those companies must now must now supply to the IRS with information on their customers, including: name, address, and phone number; the gross proceeds from sales; and any capital gains or losses. 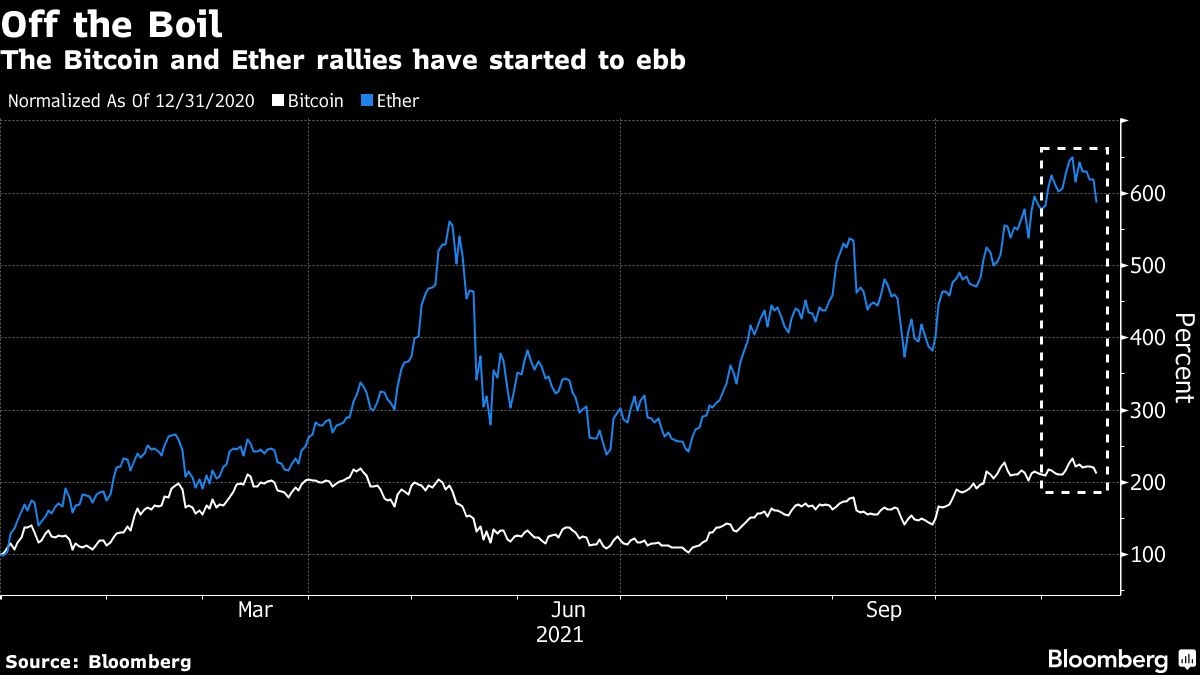 Hughes also cited concerns about China continuing its regulatory crackdown. The country will study the option of levying punitive power prices for companies that are involved in cryptocurrency mining, National Development and Reform Commission spokeswoman Meng Wei said at a press conference.

“It’s something that Bitcoin is always going to be so volatile toward -- the more there is an attempt to regulate it, to control it,” said Fiona Cincotta, senior financial markets analyst at City Index. “It just takes the edge off its draw.”

Meanwhile, Twitter Inc.’s chief financial officer said in an interview Monday with Dow Jones that it didn’t make sense to invest the company’s cash in crypto assets such as Bitcoin. Twitter co-founder and Chief Executive Officer Jack Dorsey is one of the highest profile advocates of cryptocurrencies.

Bitcoin has more than doubled this year, while Ether is up about sixfold. Both scaled records last week amid a fervor for digital assets driven by speculative demand and controversial arguments that they can hedge inflation risks.

“It looks like this is just a correction from the bullish sentiment that had been building in the market -- volatility had been heading down, BTC options skew had entered negative territory,” said Noelle Acheson, head of market insights at Genesis Global Trading. 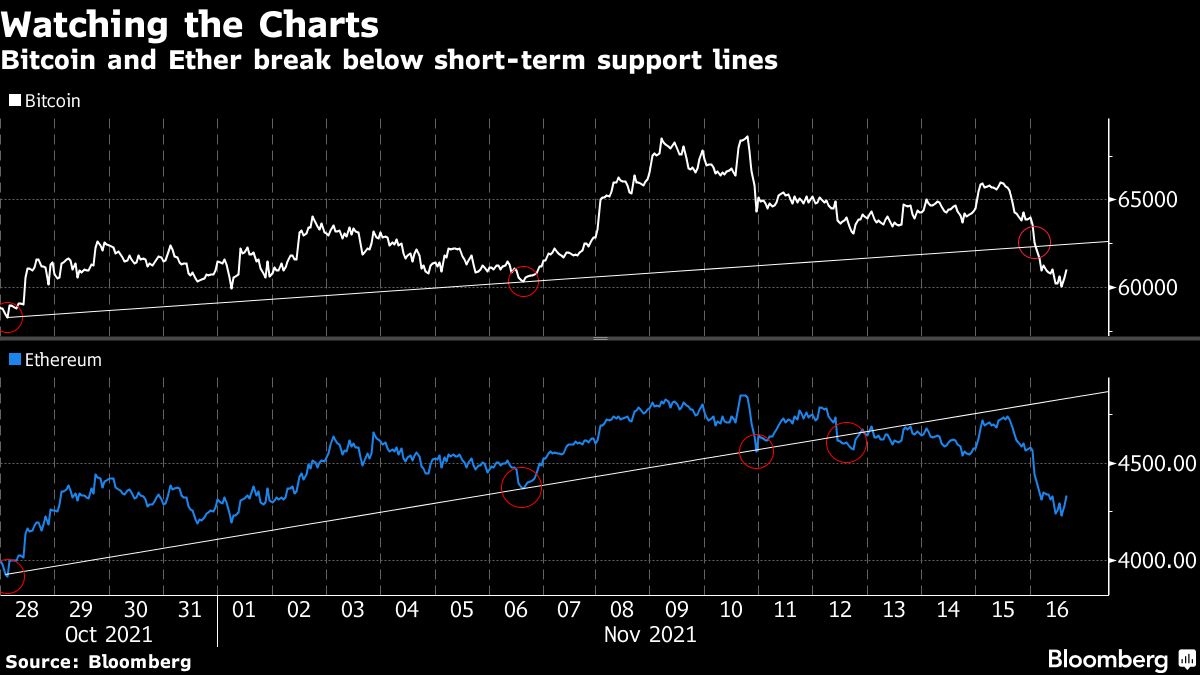 Many chartists are looking for technical signals to see where Bitcoin can go next. Its decline took it to its 50-day moving average, which acted as a support level. 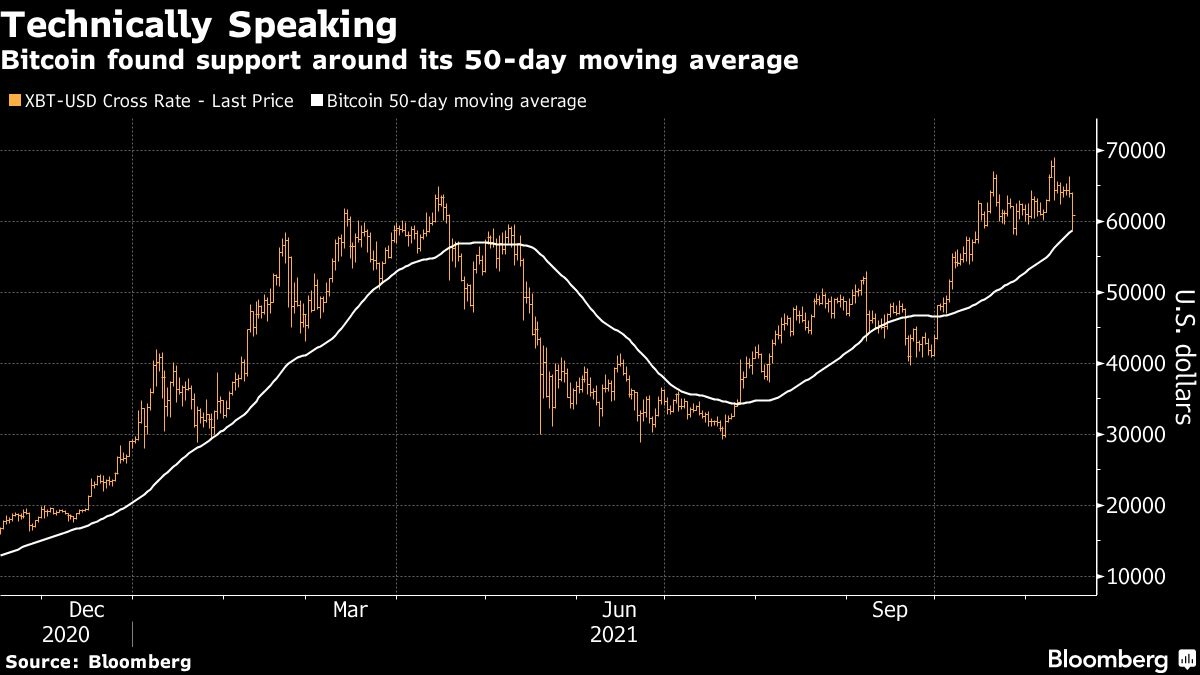 If Bitcoin drops much below its late-October lows of around US$59,000, it would mark a so-called lower-low, which would leave it vulnerable to further declines, Matt Maley, chief market strategist for Miller Tabak + Co., wrote in a note. But a drop below US$50,000 -- before  the end of the month -- would take it below its trend-line from the July lows. That means a further short-term decline would not do any technical damage, he said.

“Bitcoin is getting hit hard,” said Maley. “I looks like it’s merely some profit-taking after its strong run over the past six weeks.”