Crypto and blockchain is where the world wants to go: Bruce Croxon

This month’s cryptocurrency meltdown has at least one bright spot for advocates of a Bitcoin exchange-traded fund in the U.S.

As the price of the largest digital asset cratered, the US$660 million Purpose Bitcoin ETF (ticker BTCC) in Canada -- North America’s first such fund -- moved in lockstep.

That may not sound like a good thing, but it kept the ETF’s price stable relative to the value of assets it holds.

The ability to keep trading without huge premiums or discounts appearing in a fund’s price is a key argument in the case for an exchange-traded crypto vehicle. In contrast to BTCC, for example, the US$23.9 billion Grayscale Bitcoin Trust (GBTC) at one point traded about 21 per cent below its net-asset value during the turmoil.

Regulators have yet to approve a U.S. ETF, in part because of concerns on how a fund would be able to handle the token’s infamous volatility. But if Canada’s ETF is anything to go by, the concern might be misplaced.

The reason why BTCC was able to keep its price discount to a minimum during the selloff boils down to the fact that it is an ETF. To keep its price in line with its holdings, specialized traders either create or redeem shares of the ETF to adjust the outstanding supply as demand shifts. That process doesn’t exist for trusts like GBTC, which doesn’t allow for share redemptions -- which can create dramatic dislocations.

“While the recent nasty selloff in Bitcoin will likely spook the SEC, it should do the exact opposite and give them maximum confidence to approve, as it showed once again how well the ETF can handle pressure thanks to their fungibility,” said Eric Balchunas, Bloomberg Intelligence ETF analyst. Investors “deserve to get something that tracks the price well -- and ETFs have shown they are the best structure to do that.” 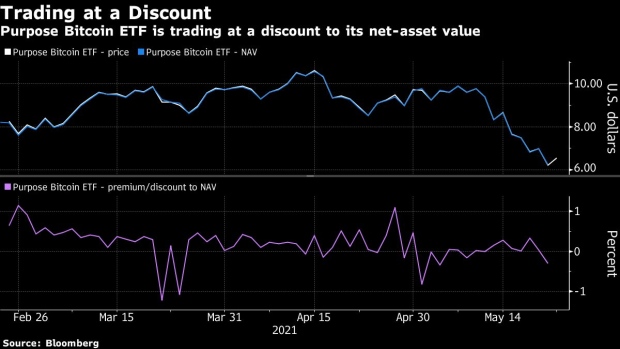 Bitcoin has plunged over 33 per cent so far this month, dragged down by renewed regulatory concerns from China and criticism from Tesla Inc.’s Elon Musk about its energy usage. The world’s largest cryptocurrency is hovering near US$37,900 per coin, down roughly 40 per cent from a mid-April peak.

At least 11 companies are looking to launch a Bitcoin ETF in the U.S., and nine of them have filed since the end of 2020, according to a tally kept by Bloomberg Intelligence. VanEck renewed that push with a filing in late December, but the SEC has delayed a decision on its application until at least June. VanEck also filed for an ETF tracking the second-largest cryptocurrency Ether.

Hopes for a Bitcoin ETF approval in 2021 have faded somewhat in the past few weeks. New SEC chairman Gary Gensler told Congress that the crypto market “could benefit from greater investor protection,” and later a letter from the Securities and Exchange Commission staff warned that Bitcoin is “highly speculative” and volatile.

But Bitcoin’s turbulence shouldn’t prevent the SEC from giving the green light, according to CFRA Research’s Todd Rosenbluth.

“The regulatory approval process for a U.S. Bitcoin ETF appears more focused on whether they have comfort in the risks related to Bitcoin in a fund and whether the fund could become too large to handle the lack of liquidity in the market,” said Rosenbluth, the firm’s head of ETF and mutual fund research. “I don’t think the volatility for Bitcoin impacts the decision-making process, but the fact that demand remains high could add data to support their concerns about the impact of the fund’s potential size and inability to close to new investors.”