Crypto will continue to innovate even though China has bowed out of this game: ProChain Capital

Bitcoin, Ether and other digital tokens tumbled as China intensified its push to rein in crypto speculation and mining.

Bitcoin fell 7 per cent to US$41,569 as of 9:48 a.m. in New York. The losses were more severe in other coins, with Ether, EOS, Litecoin and Dash all falling more than 10 per cent. Crypto-related stocks also came under pressure, with Marathon Digital Holdings Inc. tumbling 6.6 per cent, while MicroStrategy Inc. lost 5.8 per cent.

China’s central bank said all cryptocurrency-related transactions are illegal, according to a Q&A statement on PBOC’s website. It’s an urgent task for China to root out crypto mining and the crackdown is important to meet carbon goals, according to the guidelines on the website of the nation’s economic planning agency.

Bitcoin looks headed toward the US$40,000 level or lower, Fawad Razaqzada, an analyst at ThinkMarkets, warned. China’s strict approach is part of the reason why Bitcoin prices collapsed in May and have struggled to regain previous all-time highs above US$60,000.

“The risks are skewed to the downside for now,” Razaqzada wrote in a note to clients. “China is the major risk that is likely to keep prices under pressure for a while.” 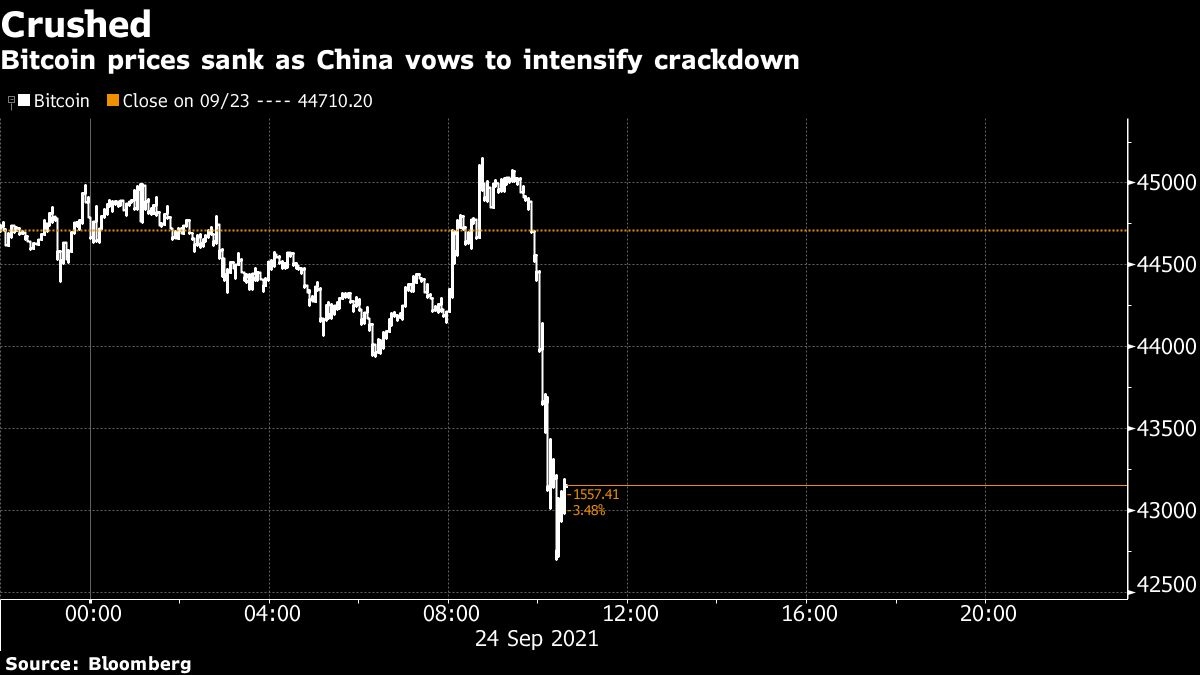 China has brought intense scrutiny on the crypto industry this year amid heightened concerns over risks of fraud, money laundering and excessive energy usage. The country is a dominant player in crypto and as recently as April had a 46 per cent share of the global hash rate, a measure of computing power used in mining and processing, according to the Cambridge Bitcoin Electricity Consumption Index.

In July, the central bank vowed to maintain heavy regulatory pressure on cryptocurrency trading and speculation.

“China is dealing with a few fiscal systemic challenges right now, including, crypto, Evergrande, housing, economic slowdown,” said David Tawil, president of ProChain Capital. “My expectation is that this is ‘for real’ and that China will not reverse course on this position anytime soon, if ever. Nevertheless, if this move was inevitable, better that it happens sooner, so that the investment community can digest and move on.”

Amid the selloff, more than 111,000 traders had their accounts liquidated over the past 24 hours, according to data from Bybt, a crypto futures trading and information platform.

Still, Nomura Securities strategist Charlie McElligott says the move from the PBOC isn’t a complete shock. “Chinese authorities have been making statements similar to this for a long time,” he wrote in a note. “But as always, price is news, and any sloppy liquidation could beget more selling.”