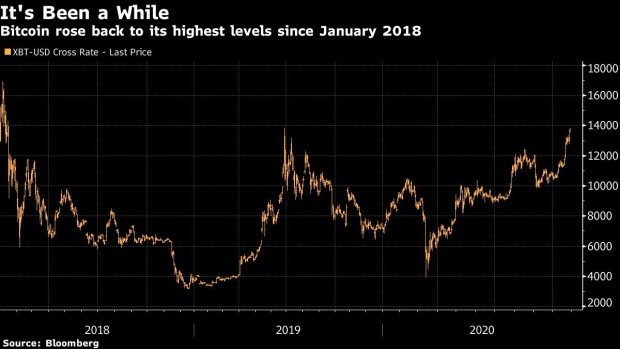 (Bloomberg) -- Bitcoin advocates say this time will be different as the virtual coin surges back to price levels last seen in the wake of the collapse of the cryptocurrency market bubble almost three years ago.

Proponents of digital assets say the recent rally isn’t another speculative frenzy among individual investors. They point to rising institutional interest, PayPal Holding Inc.’s decision to allow customers access to cryptocurrencies and the use of JPMorgan Chase & Co.’s JPM Coin to make a payment for the first time.

“This rally seems to be more driven by allocators with larger balances getting involved, rather than a flurry of retail investors,” said Nic Carter, co-founder of researcher Coin Metrics.

The largest cryptocurrency spiked above $13,000 last week for the first time in over a year following an announcement from PayPal that customers will be allowed to buy and spend digital currencies on the platform. Bulls cheered the development, with many saying the move suggests greater mainstream acceptance.

“PayPal’s announcement will help to educate millions of people about the value of Bitcoin and digital assets to their lives, their wealth and freedom,” said Guy Hirsch, managing director of U.S. for the eToro trading platform. “We are very excited about the news and looking forward to seeing other major payments apps get into the space.”

Fidelity Investments launched a Bitcoin fund over the summer, becoming one of the most-prominent firms yet to express interest in crypto. Public companies Square Inc. and MicroStrategy Inc. have also recently invested in the coin. The European Central Bank said it will start experimenting with a digital version of the euro, as China continues to ramp up testing of a digital yuan.

While some countries have started to express interest in creating digital currencies, there is little evidence to support claims that crypto will displace fiat currencies anytime soon. Mike Novogratz, founder and chief executive officer of Galaxy Investment Partners, argues that the token serves as “digital gold” and is a long way from everyday use.

In a Bloomberg TV interview, the prominent Bitcoin investor said he didn’t think the token will be used as a transactional currency anytime in the next five years, but is instead used as a store of value.

To Marc Chandler, chief market strategist at Bannockburn Global, PayPal’s embrace can be seen as a litmus test for crypto use cases.

“Now that you have the capability to do it, are you going to?” said Chandler. “Let’s see if people will use it.”