Bitcoin has lost almost 20 per cent in less than two weeks, proving that extreme volatility remains a hallmark of crypto investing.

Yet in the world of Bitcoin, it’s largely business as usual with bullish conviction intact -- in contrast to traditional markets where moves on this scale are met with alarm. The largest cryptocurrency edged higher after earlier slipping as much as 3.4 per cent to US$55,663 on Friday.

“This correction seems more like a natural breather in a bull run, as well as a healthy flushing out of leverage,” said Noelle Acheson, head of market insights at Genesis Global Trading. “Meanwhile, mainstream awareness continues to spread, adoption continues to grow, market infrastructure continues to develop, and the Taproot upgrade sets the stage for even more progress in Bitcoin’s eventual use cases.” 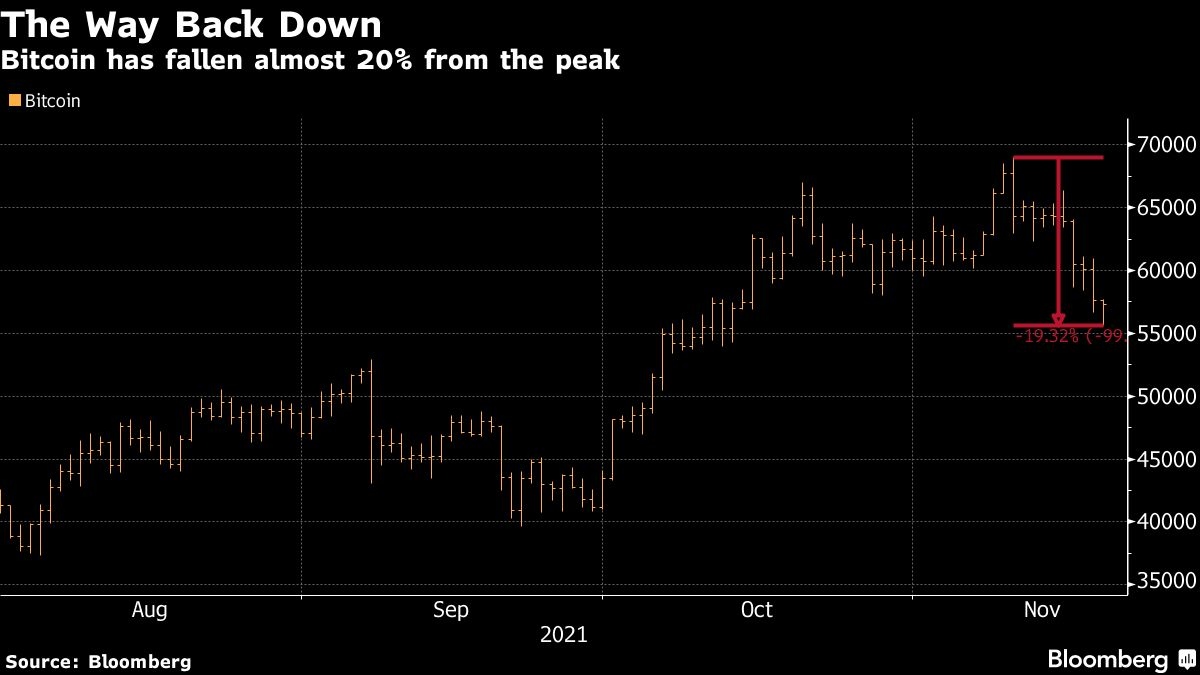 Some analysts say a sharp pullback is normal after prices skyrocketed 40 per cent in October. China’s crypto crackdown and new U.S. tax-reporting provisions that are being viewed as unfriendly to crypto investors have also soured sentiment.

“During the 2016/17 Bitcoin winter, the thing that really took the wind out of the sails of crypto was when interest rates rose and liquidity was draining from the system,” said Jamie Cox, a financial adviser and managing partner at Harris Financial Group.

Price swings of 20 per cent or more aren’t uncommon among cryptocurrencies. After hitting a record of almost US$65,000 in early April, Bitcoin slumped more than 50 per cent by late June before turning higher again. After hitting nearly US$53,000 in early September, it retreated about 25 per cent over the next couple of weeks.

Aficionados of digital assets are used to big swings and often undaunted by pullbacks. They often view Bitcoin as a modern day store of value and inflation hedge, though such arguments are controversial.

“When we see a big move, we take a step back and say, has anything fundamentally changed? Has there been a material event or development, or is it driven by flows and transitory sentiment?” said Hunter Horsley, chief executive of Bitwise.

“This move looks like the latter,” Horsley added. “When we look at the fundamental thesis and drivers of the space, they continue to look incredibly optimistic.”