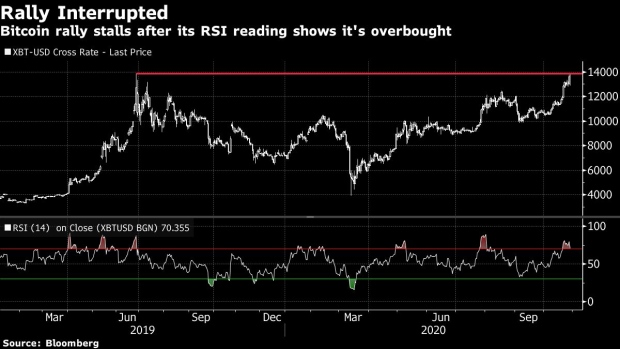 (Bloomberg) -- Bitcoin’s scorching rally lost steam on Wednesday amid widespread risk aversion, falling the most in a month.

The world’s biggest cryptocurrency by market value slumped 3.1% to $13,201 as of 2:40 p.m. in New York. Alternative coins including Litecoin and Monero also posted declines, while the Bloomberg Galaxy Crypto Index dropped 3.7%.

“This broad, risk-aversion-trading session is triggering widespread panic selling, which is seeing every risky asset, like gold and Bitcoin, really start to plummet,” said Edward Moya, a senior market analyst at Oanda Corp.

Wednesday’s high of $13,857 only narrowly exceeded Bitcoin’s most recent peak, set in June 2019. While some chartists say Bitcoin could be forming a bearish double-top pattern, it also could be taking a breather after its 14-day relative strength index reading passed 70, signifying the coin was overbought.

Before Wednesday’s pause, Bitcoin had gained roughly 15% since an announcement last week by PayPal Holdings Inc. that it will allow customers to use cryptocurrencies.

But Bitcoin advocates say the coin’s decline may not be cause for concern. Many argue cryptocurrencies -- and Bitcoin in particular -- could eventually stand to benefit in an era of rampant central-bank money printing and the potential for an inflationary spike.

“The way we see it, something unexpected has to reverse increasing adoption of Bitcoin as digital store-of-value such as gold, or the price has few options but to rise,” Mike McGlone, a strategist with Bloomberg Intelligence, wrote in a note.