Bitcoin closed in on the lowest in three weeks as the cryptocurrency’s sizzling rally gives way to pessimism that prices are too high.

Bitcoin tumbled as much as 11.3 per cent Thursday, sliding below US$31,000. The largest digital asset has trended lower ever since breaking through US$40,000, and losses have accelerated in the past two days.

While soaring crypto prices fueled a speculative mania among the Robinhood crowd, it’s also made professional investors reluctant to buy at the top. Prices are still more than double the levels from early November and some technical analysts have argued that a retracement is overdue. It last traded below US$30,000 on Jan. 5.

“Bitcoin has already achieved the fastest-ever price appreciation of any must-have asset,” wrote JPMorgan Chase & Co. strategists John Normand and Federico Manicardi in a report on Thursday. “Current prices are so far above production costs that mean-reversion lower in returns is a recurring concern.”

Bitcoin was down 10 per cent to US$31,459 as of 4:51 p.m. in New York. Prices are on track for their first back-to-back weekly decline since early October.

Adding to the anxiety, a report in a trade blog suggested that there had been what’s known as a double purchase, where the same “coin” is used in two separate transactions. Industry veterans downplayed the notion.

“This is part of the normal operation of the blockchain to allow for a highly parallel system,” said Jacob Illum, chief scientist at researcher Chainalysis. “Occasionally, the Bitcoin blockchain will have competing mined blocks, but only one chain-forming from competing blocks will be accepted by the network.” 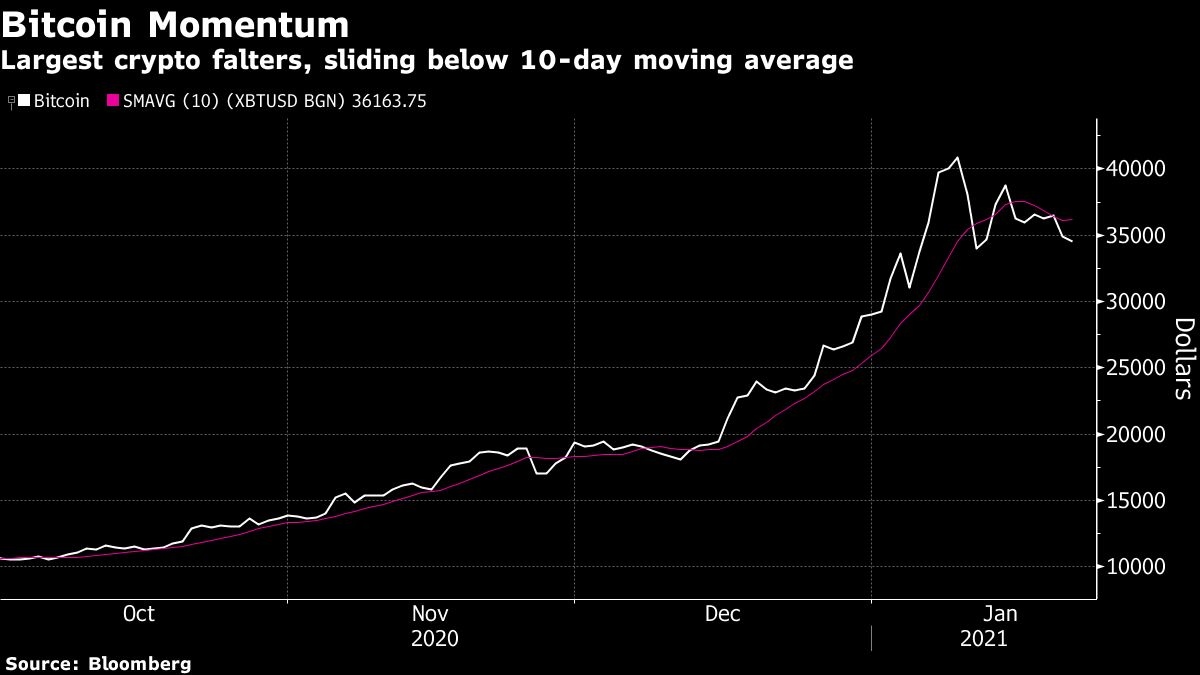 However, should a double spending event actually occur, it would be a cause for concern in the market, according to Edward Moya, senior market analyst at Oanda.

Chart patterns suggest the market is consolidating within a “bullish pennant” formation, according to Matthew Weller, head of research at Gain Capital Group LLC. A sharp move higher could push prices above US$50,000, while a break lower would point to a deeper retracement below US$30,000, he predicted.

“It would likely take a more severe drop to erase the established uptrend,” Weller wrote in a note.

Despite the selloff, Wall Street hasn’t lost interest in the new asset class. On Wednesday, BlackRock Inc. filed paperwork to add Bitcoin futures as an eligible investment in two funds, the first time the money manager is offering clients exposure to cryptocurrency.